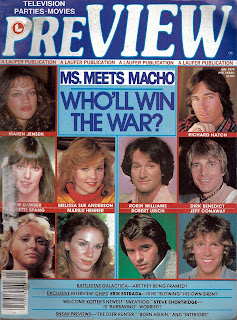 Ah, my loves, I've been holding out on you...! When I bought the prior issue of PreView (presented in an earlier edition of Fun Finds), I didn't let on that there was another one I bought at the same time, but which is from a couple of years later. So now I've gotten around to sharing it with you as well. This era of entertainment was "mine," as I was almost twelve and very much tuned into the people who were then "hot" in TV and movies. I think this will be a fun, nostalgic trip down memory lane for some of you as this magazine is chock full of all sorts of pictures of personalities. Let's go! 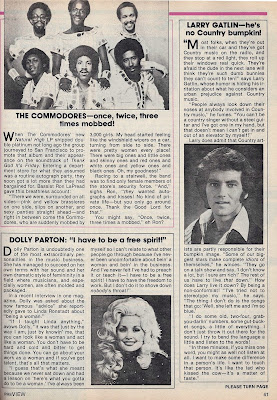 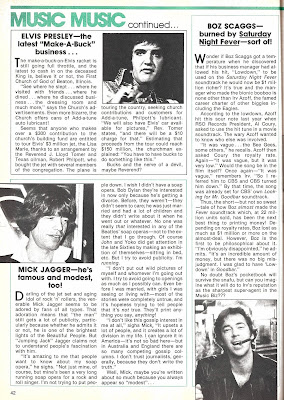 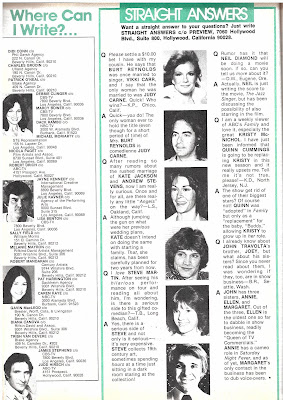 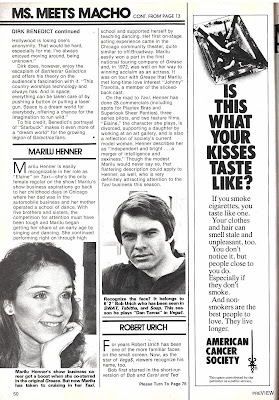 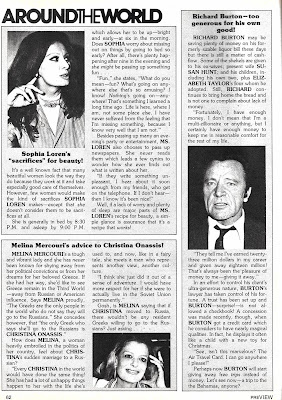 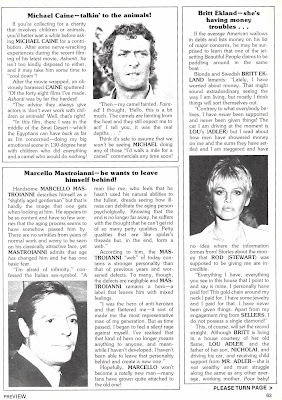 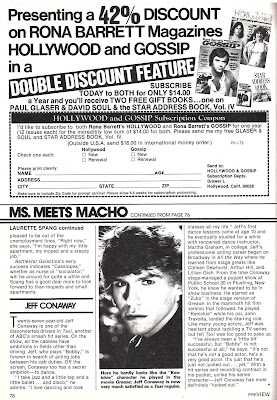 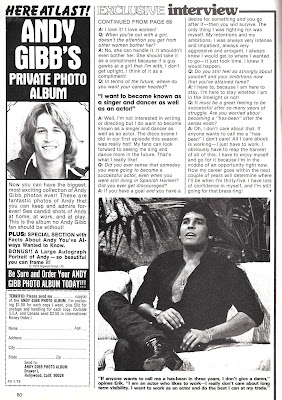 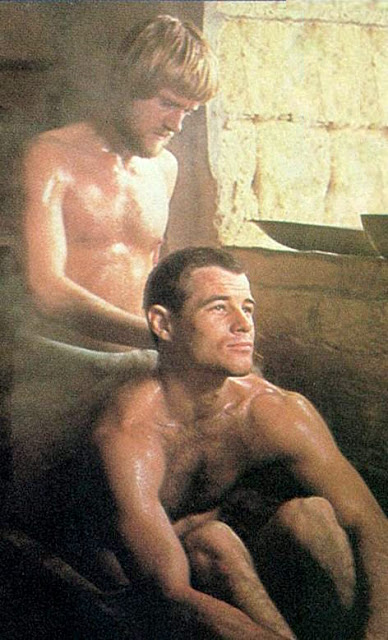 Juicy. This stuff never gets old, well maybe some of it. Super fun Poseidon. Lisa Taylor and Tommy Lee Jones dated? I am assuming the photo of them together is after the film as he has a stache, and didn't in the film. She was a very big model in her day not just on screen.
Debbie and Marie has a nice ring to it.
I saw The Deer Hunter when it come out and again recently. Serious stuff, the films previewed in this gossip rag are all serious/artsy. They look funny next to sleeveless Steve Guttenberg.
I really don't remember a southern sweathog, just the regular crew and a girl named Debralee something. He's cute but looks 30.
Maren Jensen just came up this week. She did a horror movie with a gorgeous Sharon Stone in 1981 called Deadly Blessing, that someone recommended. Amish horror I think. Also funny that you mention Sunburn. I have been on a Farrah fest this week and watched Somebody Killed Her Husband (terrible) and Saturn 3 (really fun) the only one not on youtube is Sunburn sadly. Thanks for this gossip roundup.

Fun trip down memory lane. This was my era, too!

Debralee Scott, AKA “Hotsie” Totsy. Although she was likely better known for her role on Mary Hartman, Mary Hartman and her rounds on pretty much every game show of the 1970s. She was engaged to a police officer who died on 9/11 and apparently never was able to get past her grief, reportedly developing a drinking problem. She died suddenly in 2005 of an undetermined cause, falling asleep one afternoon and never waking up.

This is the era of my wonder years too!

It's hilarious, as you noted, to see what were probably the two most serious films of 1978, The Deer Hunter and Interiors, get articles here.

And, hey, why does that photo of Marilu Henner on page 50 look more like Pamela Bellwood?

Hi Poseidon-
Here's an okay video of Carol Burnett ans Erma Bombeck in "The Grass is Always Greener Over the Septic Tank!"

I'm a bit older than you Poseidon so by this time I was heading in to my late 20's and not paying much attention to these rags. But there was much to remember reading this post!

Had to laugh at the guy in the lower right corner of the Speak Easy! page, judging Dinah Shore's rotten dress style! He describes her look like he's Edith Head commenting a fashion show! "Drab colors and styles" and "Huge belts and heavy necklaces"! He has fashion speak!

John Cazale was a great actor who died too soon. If I remember correctly he was involved with Meryl Streep back in those days.

I loved "Interiors"! Geraldine Page waxing poetic over a vase was sooo good! The family was so controlled and monotone and then when the divorced dad brings Maureen Stapleton wearing red into the picture, it was wonderful.

Dane Clark, Marie Windsor and Larry Storch in one picture! What a combo! Maybe Dane and Marie have paid up and are waiting to see Forrest Tuckers "reveal"! Marie was sooo good in The Narrow Margin!

My late lamented friend Fred used to talk about his dream picture, "Clash of the Titians" with Rhonda Fleming, Arlene Dahl and Maureen O'Hara as goddesses fighting over who would rule Earth!

As a life long David Bowie fan (my eyebrows came off in '73-74) I have to say I've never heard of a connection with Liza Minnelli! I've never even seen a picture of them together. 1979 would have been when he was on Saturday Night Live and did 3 songs promoting his Lodger album, with Klaus Nomi and Joey Arias as backup singers, so at least he was in New York at the time. But with Liza? Hmmm.

And as far as his critics on the Speak Easy! page are concerned, I just say, "Huh."

Gingerguy, you're really "on it" with Lisa Taylor. I had no clue who she was! I though Marie looked like a lollipop in that picture! Ha ha! I never liked that hairdo on her, either, which my sister ran out and got. Try this to see "Sunburn" if you wish!:

F. Nomen, that would be tough to take. Sad ending for Ms. Scott (who had legions of fans, I do believe! Her name rarely comes up online without favorable comments.)

Mark R.Y., I'm not sure, but you can certainly see where Marilu had a major facial overhaul after that photo was taken!

Thanks, Rick. I'll have to take a gander at that.

BrianB, the Dinah Shore guy was a favorite of mine, too. HYSTERICAL!! Yes, Cazale was involved with La Streep prior to his death. Hey, at least Rhonda and Arlene did do a film together, as sisters, which ought to have helped people in telling them apart. LOL

These rags used to be fun. Looking now it's kinda amazing that 50% was spot-on and,btw, I heard that about Jackson and Stevens as well. Haha!

Can you even imagine Andrew walking in on Stella and Kate locked and loaded? LOL He wasn't free of rumors either, though EVERYONE is always gossiped about, justly or not. There was a tale around Hollywood that all three Angels were married to gay men at once. Jackson to Stevens, Fawcett to Lee Majors and Smith to Roger Davis... will we ever know?