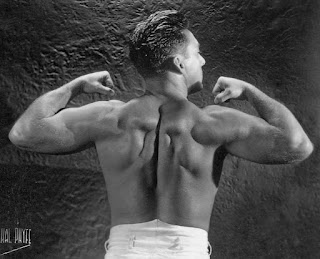 Why, yes, literally! We stumbled upon the joys of silent film hunk (and later talkie western star) George O'Brien back in 2011 and have tried to find ways to include him in photo essays and so forth ever since. But as it's been a while since we've given him the once over and January is dragging on relentlessly with a cold snap and snow, we though we'd warm things up with a few more pictures of the hunkalicious Georgie.

Love love love discovering hunky movie stars of yore, thank you for enlightening us on the talents of Mr. George O'Brien! Your wonderful website never ceases to amaze with the newly rediscovered details of entertainment history. Thank you for making the winter of our discontent a whole lot hunkier.

Oh my my my my my!!! And those shorts with the surfboard seem to be making a sand castle inside them!

He could have played Clint Walker's father, or Patrick Warburton's great-grandfather. Delicious!

Almost so good looking it's painful! His look is perhaps the most contemporary of the classic stars. I think because not only is his physique more along modern lines than most men of the period but his hair must have been unusually thick since even though it was Brilliantined like everyone else's it merely looks tousled instead of slicked down.

The greatest actor? No, but he could be good as he was in Sunrise and was always easy on the eye even if the film was negligible.

Wow, what a cutie. I am partial to Irish looks (must be something in my blood) but you are right on target with how contemporary he looks. "When a Man's a Man" sounds like my kind of movie. That really is some body, the last picture is a stunner-that tummy is a washboard. Thanks for this fun post!

Well I'm glad several of you liked this and could appreciate the beefy appeal of Mr. O'Brien!

Norma, you're always so verbose. LOL! Glad you liked it.

VictorG, thank you very much for the kind words. They mean a lot. Trust me, I like discovering them, too!

Forever1267, you're so right! I love his little shorts (they pretty much qualify as briefs!) Hard to believe that men's swimwear could be so fun back in the day. I despise what is seen at pools and on beaches now. (And so many young men swimming with underwear -!- on under their "suits.")

Joel, his hair was crazy thick. And I think he kept most of it until he was up in years. Obviously no man is going to hang on to his looks at 86, but he was still a nice looking man for a long time after (prematurely) retiring from the screen. I agree with you completely about some of his films. I have no clue why, but a local store was selling "The Iron Horse" on DVD for like $3.00 or maybe $5.00 and I never bought it. Then one day the store was closed up. LOL I wish I would have gotten it just for the hell of it.

Gingerguy, it looks like "When a Man's a Man" is a western about water rights, so I can't vouch that it lives up to its title! LOL I did watch some of "Windjammer," which was a bit of an oddity, though George looked good in his tight t-shirt. Sometime, disaster fan that I am, I need to see "Noah's Ark" and "The Johnstown Flood." Glad you liked Mr. O!

Okay...I just watched a great amount of "The Iron Horse," which is on youtube in more than a dozen parts. But the undoubted highlight is a knock-down, drag-out fight between O'Brien and the man who killed his father. They tear half of each others' clothes off! It alone is worth watching and here it is:

Well I've seen Sunrise more than once, and I never knew all that was going on underneath. No wonder Janet (and others) were so "clingy."

Looking at all the headshots, I'm not sure if I would have known it was the same guy from year to year, and genre to genre. I wonder what his following was like back in the day. Maybe they had a hard time keeping track of him as well.

Dave, he seems to have been quite a star. He was the leading man, often above the title, in many a 1920s and 1930s film, later segueing to supporting roles as he got older. And he also appears to have been featured in many a movie mag layout. I think because his films didn't wind up as bonafide classics ("Sunrise" excepted) -- many were B westerns -- and his leading man era was over by the time he turned 40, he drifted out of the public's consciousness and not too many contemporary viewers have bothered to dig back into his work. (He had a highly distinguished and decorated naval career during and after WWII which took him out of the Hollywood circle for a large hunk of time.) He apparently did only one TV acting appearance (in 1957), though there might be some unaccounted for. I think he found other ways to fill his time after 1940 besides the occasional acting gig (almost always for John Ford.)