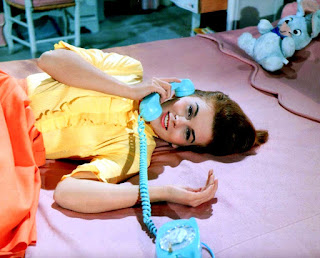 To be honest, we're sort of phoning it in today. A little while ago I made a little montage of actors from The Towering Inferno speaking on the telephone (shown below) for use on Facebook and later it occurred to me that shots of celebrities speaking on the phone might make for a fun installment in my series of occasional photo essays here. I do think the world of entertainment, drama and comedy both, lost a little bit of something once corded phones went out of style (and don't even get me started on using a dial or, better yet, dialing the phone with a pencil! LOL) So today we're going to observe some famous faces chatting on the telephone. Perhaps one of your favorites will have called in? Our cover girl is, of course, Ann-Margret in 1963's Bye Bye Birdie.
Our five minutes are nearly up and we don't have another dime to insert into the payphone, so we're close to disconnecting from this post. But, lest I forget, that mystery shot of the woman up above - seen with actor Ron Harper - is none other than 1930s big screen leading lady Jean Arthur, who had her very own (brief) TV series in 1966 called The Jean Arthur Show. She played a widowed attorney who accepts her son Harper into the family practice. And now just another few shots.