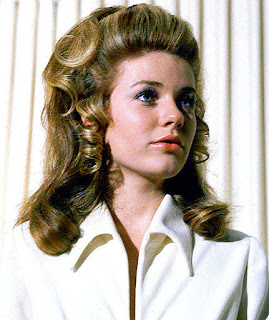 Here we are again, on the heels of George Kennedy's passing, addressing the death of one of the members of the '70s Disaster Movie Club (an organization that exists solely in my own mind and applies to those performers who starred in a big-screen disaster movie between 1970-1980.) Patty Duke's career, however, extended far beyond the work she did in this arena and we will address part of it in this photo tribute. Duke was taken from us far too soon at only age sixty-nine following an infection after a burst intestine. 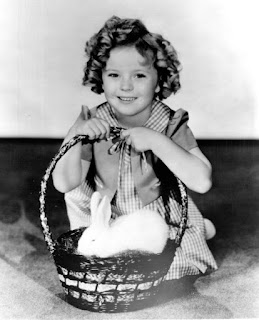 We're almost ready to say goodbye to March and enjoy the oncoming spring weather (and it cannot come soon enough!) One of the touchstones of the season is Easter and we're marking the occasion with a handful of publicity portraits that range from the cute to the corny to the campy. Thanks to little Shirley Temple for serving as our cover girl this time out! 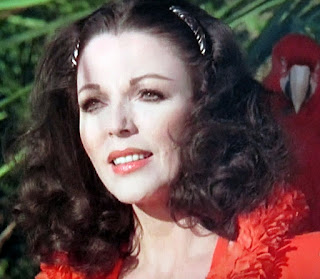 If you've read through some of our more recent TV guest star posts, you know that as of late I've been revisiting Fantasy Island (1977- 1984) and picking out certain appearances that tickle my fancy. One particular favorite includes Miss Joan Collins (a patron saint of The Underworld) as she essays the role of a visitor to Mr. Rourke's island who has the desire to be the ancient Egyptian queen Cleopatra for a couple of days. 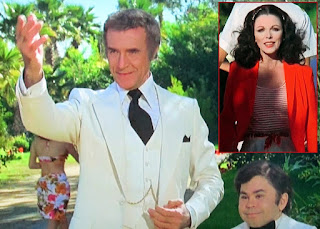 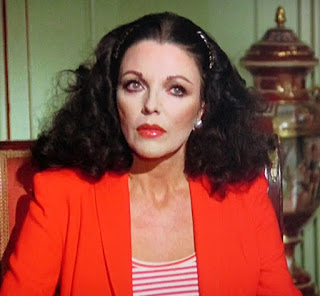 This episode aired in 1980, on the heels of Collins' scorchy big-screen hits The Stud (1978) and The Bitch (1979), but before she skyrocketed to renewed fame as the conniving Alexis Morell Carrington on Dynasty (1981-1989.) In fact, it was this episode of Island that led to her name being bandied about as a potential Alexis candidate after Sophia Loren couldn't be secured for the role and several others either weren't right for it or declined to proceed. 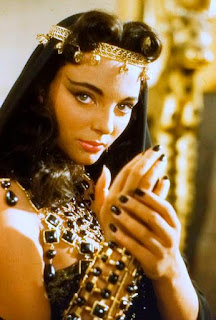 The idea of portraying Cleopatra had long appealed to Collins, though she could never quite make it happen. In 1955, one of her earliest big-budget features, Land of the Pharaohs, gave her a taste of what it could be like as she played the duplicitous and sexy Princess Nellifer. Scheming and palace intrigue, all while decked out in bangles and body makeup, marked the role, though the film was not a box office success. 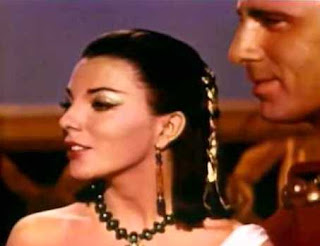 Later, when her studio 20th Century Fox was planning a new version of Cleopatra, she was tested for the role and was in line to play the Queen of the Nile. However, before it was all said and done, the decision to shift the movie from a mid-budget costume picture to a mega-budget spectacle cost her the role when the studio instead (famously) paid $1 million to Elizabeth Taylor for her services. The result was a convoluted, far-reaching, surreal money pit that almost bankrupted the studio no matter what qualities Taylor was able to bring to the part. During Taylor's severe illness, Collins was placed in the dugout as a potential pinch-hitter should her health fail to come sufficiently back around. 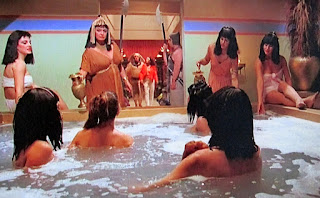 Thus, when this script came Collins' way, she was eager to take the opportunity to slither into Cleo's gilded headgear and gossamer gowns. Unfortunately, her character was duped a bit by Mr. Rourke (Ricardo Montalban) in that she was sent back to Egypt where she was captured as a slave and taken to the palace's harem! (Take note of the slave girl just to the right of the doorway to the harem's "hot tub.") 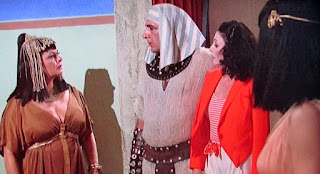 Collins is handed over to burly, brusque Ruth Roman and instructed to doff her strange clothing and put on something slinkier. Again, take note of the slave girl at the far right of this picture. This (famous) young lady was near the very start of a brief on-camera acting career. She is given a fair amount of lines to read with Collins, but seems unable to cheat to the camera, allowing viewers to see her face beyond the encompassing wig! 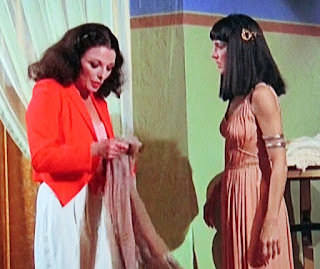 Finally, we at least get a profile shot as she presents Collins with the filmy wrap she is expected to put on. Even this, though, doesn't give us much of an idea as to who she might be.

In a quick flash, while she's warning Collins not to be impudent with the royal guards and the imposing Roman, we get a semi-close-up of her face, yet it's in the foreground, blurry when compared to Collins' more focused face! 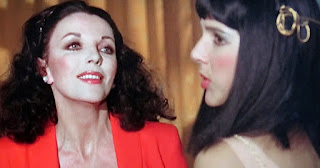 At last there is the opportunity to see full-on who has been expressing concern to Collins. Recognize her now? 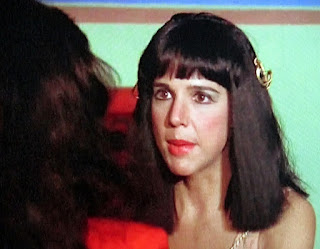 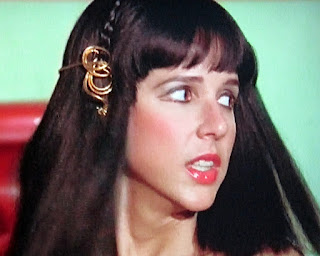 This is Patti Davis, the daughter of Ronald Reagan and Nancy Davis. In 1979, Davis had broken into TV with bit roles on several Aaron Spelling produced series such as The Love Boat and Vega$, as well as CHiPs. Sporadic work continued over the next few years, but no considerable acting career took hold. Her final acting appearance came as "Reporter" in 1989's Tango & Cash. 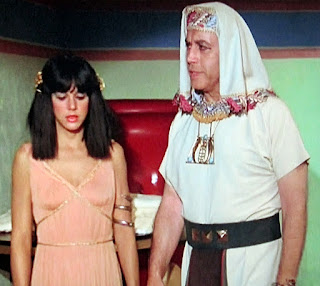 I can hardly recall a time when I've witnessed a fledgling performer seem to almost deliberately turn away from the camera and willingly become upstaged! Perhaps she found the costume or the part embarrassing for some reason. Note here the way fellow guest star Michael Ansara is approaching the area in which she's standing... 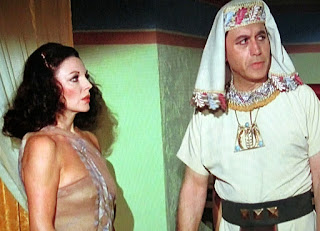 He walks directly in front of her (her arm can be seen just barely behind him here) and she does nothing to counter it whatsoever. Incidentally, I had my contact who is quite close to La Collins ask her if she knew she'd worked on Fantasy Island with President Reagan's daughter Patti, but she had no recollection of such a thing at all. (Now, thanks to the magic of The Underworld, she can see evidence of it should she wish to!)

Aforementioned guests Ansara and Roman had enjoyed busy careers in movies and on TV. Ansara, one-time husband of Barbara Eden, had an imposing stature and a strong voice, which he used for animated programs towards the end of his career. (He died in 2013 at age ninety-one of Alzheimer's Disease complications.) Roman had the better movie career of the two with Champion (1949) and Strangers on a Train (1951) among her many credits. After this, she worked on Knots Landing for a while and had a recurring part on Murder, She Wrote. She died in 1999 at age seventy-six from natural causes. 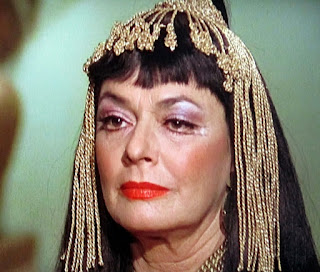 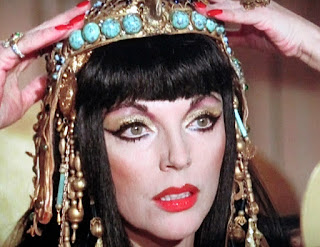 Anyway, Collins' character is enlisted to impersonate Cleopatra - to distract the visiting Marc Anthony because Ansara believes that the real one would align with Anthony against him. With Collins stepping in, Anthony can busy himself with what he thinks is a queen, but is actually just a harem slavegirl.

Just before the big masquerade, Montalban slips into Collins' chambers, disguised as a guard to offer her some words of advice. Montalban always relished these opportunities to briefly shed his iconic off-white suit just as Collins relished dolling herself up in the Cleopatra finery (reportedly made up of everything from Claudette Colbert's leftovers from the 1934 movie to some of Cher's lounge act costuming!) Collins would do it yet again (see below) for a costume party in the telefilm The Making of a Male Model (1983) with Jon-Erik Hexum. 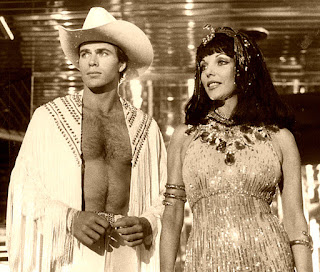 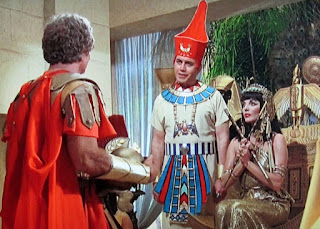 But who do we have in the pivotal role of Marc Anthony? Surely not Richard Burton, who'd played it in the 1963 epic (and who'd costarred with Collins in 1957's Sea Wife.) It's a little hard to tell from the full head of curly lock just who this is, isn't it? 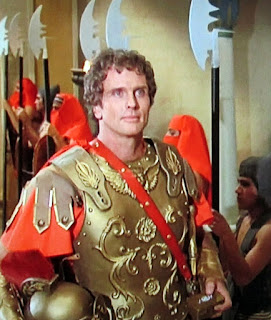 He's barely adequate as the heroic soldier and lover and is furthermore done no favors by the costume party "armor" he's given, not to mention the white and gold drum majorette boots that they have saddled him with!! 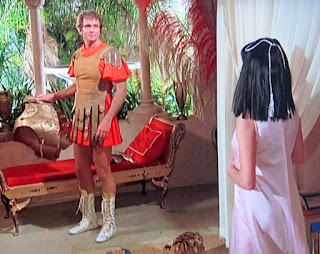 Anyway, we prefer our Ron Ely half (three-quarters?) naked over any other method of presentation: 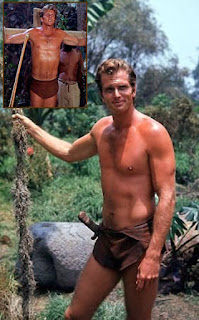 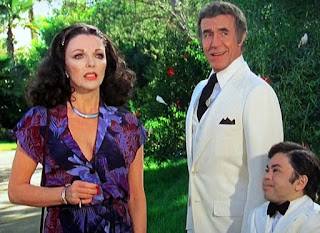 As was too often the case on Fantasy Island, once the fantasy was over and the featured guest was headed home, they revealed that someone else within the story was also there enacting a fantasy. Thus, folks who "fell in love" (read: slept together) during their visit could live on happily ever after and travel home together (though they hadn't arrived on the island together!) 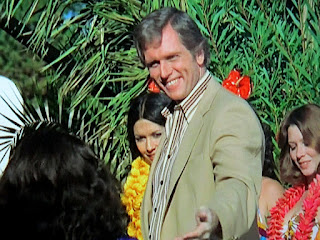 So it is that Collins is confronted with Ely - hair now back to normal - as a fellow island guest whose fantasy had been to be Marc Anthony for a couple of days... 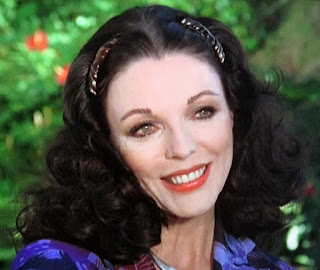 This episode gave us many flattering shots of Collins (with her own hair, seen here, versus the wigs that she would soon be adopting close to full time during the grueling hours on Dynasty.) 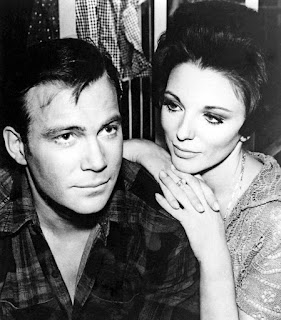 This was the first time that Collins and Montalban had ever acted together, but they did have something in common. They each guest-starred on episodes of Star Trek that later proved to be among the most well-remembered of the cult series. In hers, "City on the Edge of Forever," she played a 1930s social worker who Captain Kirk falls in love with during a trip through time, but who he is asked to allow die in order to not alter the earth's history. What she lacked in authentic 1930s attributes she made up for with stunning, delicate beauty. 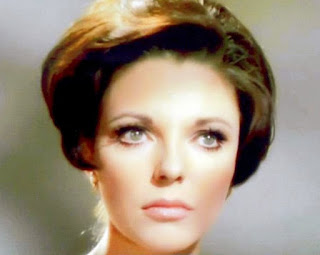 Last year, a highly-welcome Collins attended a Star Trek convention as a guest for the first time! (You can see ever-chatty Shatner and her in an interview together prior to that here.) 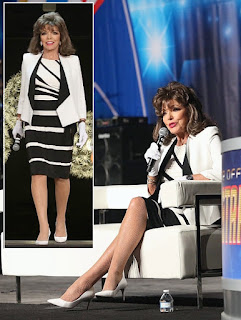 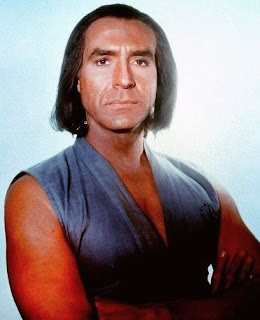 Montalban's was "The Space Seed," about a group of master race specimens held in suspended animation, who are led by the strapping gentleman. Soon, he tries to take hold of the Enterprise, but is eventually left to his own devices on a remote planet. Years later, the character would be memorably brought back for the big-screen success Star Trek II: The Wrath of Khan (1982), just two years after this episode of Island aired. 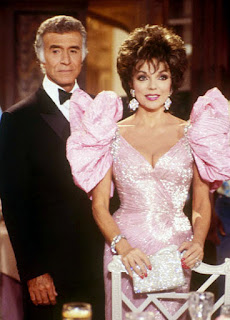 In 1986, Collins and Montalban were briefly reunited onscreen once more when Dynasty gave birth to its spin-off The Colbys (1985-1987) and Montalban was cast as the second series' chief heavy. Collins did not appear on The Colbys, but Montalban did pop up on Dynasty and in 1986 the two shared a few scenes (as well as mischievous exploits.) That concludes this installment of our TV guest star musings, but you know we'll eventually be back with more!
Posted by Poseidon3 at 1:20 PM 3 comments: