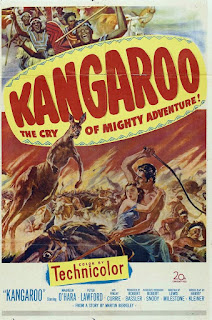 This is a potential new type of post that I'm trying out. It involves taking a closer look at gossip about a particular person or project. This one is reasonably obscure but then that's why I'm featuring it! In 1950, 20th Century Fox set out to make the first American Technicolor film shot in Australia (using funds that were "frozen" there due to currency laws of the time.) First meant to star Tyrone Power, he bailed in order to work in a London stage production of Mr. Roberts. Next, the trio of Richard Widmark, Jean Simmons and Errol Flynn was considered, but by the time it was ready to go, the project was set to star Peter Lawford, Constance Smith and Richard Boone. Smith was given to Otto Preminger for his film The 13th Letter (1951) and so Maureen O'Hara was courted for the part instead. It proved to be an ill-advised decision on her part because the script was in a state of constant rewrites and, despite top-billing, she hardly had a role to play (coming in more than 20 minutes after the movie's start and with the running time at 84 minutes total!) She wound up as something of a guest star in her own movie, with most of the things that had appealed to her about the script she read being discarded in the final rendition. 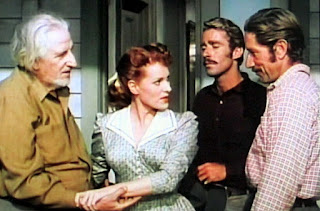 The story really concerns two con men, Lawford and Boone, who decide to take advantage of an old coot (Finlay Currie) who owns a large station in the outback. Currie's son is long-missing and Lawford decides to pose as him, meanwhile beginning to fall for Currie's daughter, O'Hara. This is more than complicated since he's trying to pass himself off as her brother, though she doesn't know that at first! The plot line had veered significantly from initially having a horde of kangaroos virtually wiping out a town (!) to this gently racy love story/con game to where there is barely a hopper to be found in the finished product, rendering the title Kangaroo (1952) pointless. The poster is an amalgam of untruths! 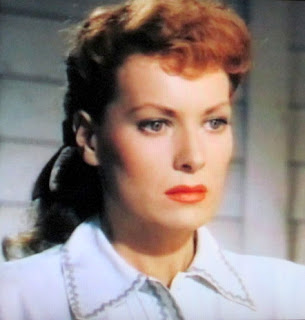 O'Hara, who was always proudly Irish, found to her delight that there were many Irish people in Australia and she took to the people there instantly. Her affection for the place and its inhabitants marked almost the only pleasant aspects of the entire experience. She wasn't fond of director Lewis Milestone's script changes, but couldn't leave the production - which was hotly anticipated in Australia - without causing deeply hurt feelings in the host country. She also felt that both Lawford and Boone were arrogant and rude with the crew and most of the people in their presence (she stated that people called Peter Lawford "Peter Awful!") 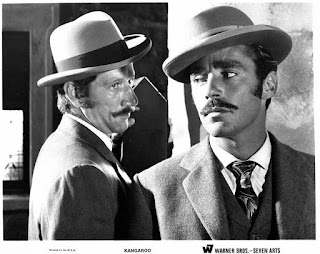 Now for the gossip... According to O'Hara, the Australian press was so unhappy with the way they'd been treated by these two gents that they decided to follow them around and attempt to dig up unappealing information on them to use in printed stories. One night, they hit pay dirt when Lawford and Boone were discovered visiting an all-male brothel which was, according to O'Hara, filled with "beautiful boys!" The scandal was such that 20th Century Fox execs implored O'Hara to somehow smooth the whole thing over and prevent the damaging story from actually going to press. In the end, it was indeed buried until half a century later when she relayed it in her autobiography. 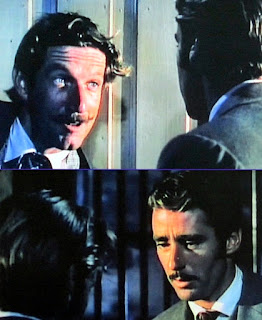 I don't know if these two actually did partake in the gay brothel (or if they ever found entertainment on their own time), but I can say that throughout Kangaroo, Boone can scarcely keep his eyes or his hands off of Lawford. They have more chemistry together than the supposed lovebirds Lawford and O'Hara. It must be said, though, that O'Hara refers to Boone as a Broadway "hoofer" when, in fact, Boone was a dramatic actor in things like Medea and The Man and never a musical on The Great White Way. Both men were married for most of their lives, Boone three times and Lawford four, not that this means anything in the final analysis. 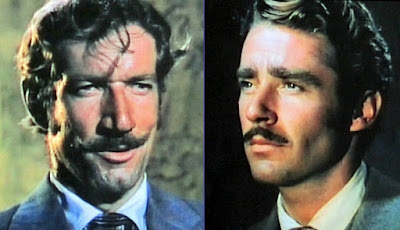 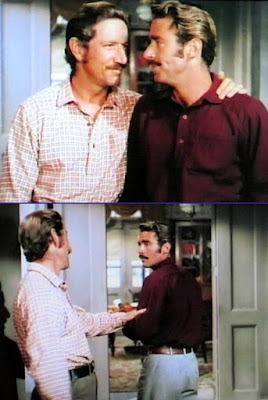 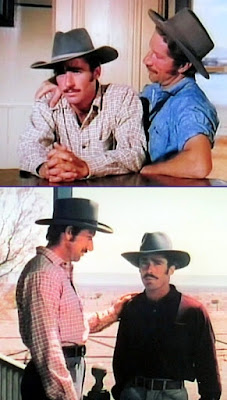 Have always liked Boone in most of his work.

Dishy! Never heard this one before so ate it up. I have so many questions. A male Brothel would have to be someplace with a large population like Sydney I guess? I know Peter Lawford was no stranger to hookers but of the female variety. I love the shots of them together and Maureen seems so credible in general.
What a strange idea for a movie, since everyone loves Kangaroos, watching a mob of them destroy a town just sounds bonkers. I have read so many awful things about Peter, I think that's why I love seeing him in The Oscar as a washed up Actor working as a restaurant manager. Thanks for this tidbit.

I was unaware of this gem and the scandalous story attached. I have to admit that I didn't recognize Boone at first and found him quite handsome alongside Lawford. It was only in his last photo in the post that I recognized him as Palladin!

I love the way that the original idea was to do a movie with a herd of killer kangaroos destroying a town, then the locals inform the producers that 'roos don't actually do that, mate-- so the poster just shows ONE really crazed-looking 'roo menacing our heroine while the hero tries to protect her with a whip.

That poster reminds me of this comic book cover from the same period showing a guy attacked by a deadly PANDA-- no, really, a (ridiculously inaccurate, like the artist never saw one) panda:

A few years later, I guess it would've been a GIANT 'roo on the poster and the title would have an exclamation point at the end, like "Tarantula!" (1955)...

I'd never even heard of this one. You always come up with the most amazing stuff!

Unknown, Boone grew on me. My first exposure was "Hombre" with Paul Newman and he was so evil! I appreciate his versatility more now.

Gingerguy, I've heard that in between all the hordes of women that Peter and Sammy Davis Jr. had fun now and again! But who knows... I do believe that the brothel was in or close to Sydney if I recall correctly. I was told once that almost all Australian men are beautiful, but they don't know it (which, of course, makes them all the more beautiful!), but I don't know if Paul "Crocodile Dundee" Hogan qualifies. LOL If you really want to be depressed about a wasted life and chemical despondency, read the book Peter's last wife wrote.

Scooter, glad you liked this! Boone's looks really changed over the years. I would say not for the better, but then I don't stand before mirrors myself the way I once did in my glory days! LOL

This was a fun read! In the series of screen shots of Boone wearing the white shirt with red plaid stripes and Lawford in burgundy, there is one picture of Boone in blue chambray and Lawford wearing Boones red and white plaid shirt! Nothing says "date mates" more than sharing each others clothes.

I can remember how big Have Gun Will Travel was back in those days but my parents didn't have anything to do with watching that program, though we watched a lot of westerns. Remembering back, it seems to me there was something about Boone or his character in the show that they thought was silly.

Lawford was one of those actors that didn't do much for me, and was only there to help the plot along. Though I did enjoy his smarmy character with Bette Davis in Dead Ringer and getting mauled by the dog.

Back around 1980 I had an 18 hour affair with a guy from Australia who was in America on holiday and I was visiting a friend in New York. From the moment we met till when I had to leave to go back home it was the most lovely time. Incredibly handsome but like you said I don't think he realized it. I've always thought of him as the love of my life.

Hi Brian and thanks for your interesting comments! That's a scream about the clothes sharing... I didn't pick up on that (and I deleted the movie after my post, so, sadly, I can't look at it again and determine if they are precisely the same shirt. Certainly looks very close at least!) MeTV runs "HFWT" on weekend mornings and I sometimes watch a bit, but I'm much more a "Big Valley" or "Laramie" fan (or even "The Virginian") when it comes to westerns. That's very special (and wistful) about your experience with the Australian.

In the photo comparing their heights, looking at Boone in the inset makes me think Aaron Eckhart looks like him in that shot.

Just signed up to post, have been reading this and Krazy Kaptions for a while. i greatly enjoy them both.

Hi and welcome, Last First. Aaron Eckhart is one of the few contemporary actors who I tend to enjoy watching! I see a little of what you're saying, though I think Aaron is better looking. Thanks!

I swear that half of these pictures look like they could've been from a film titled "Outback Mountain."

Matt, right??? Thanks for validating my own impressions while I was watching it.