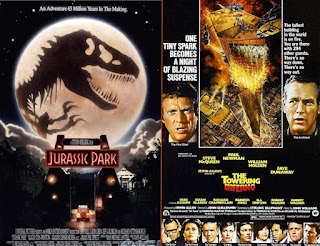 I'm unduly excited about this post because it's been a long time coming, like, even before I ever dreamed of starting a blog! Poseidon's Underworld is eight and a half years old now (unbelievable to me, in and of itself.) Before I started it, I was a frequent IMDB user reviewer (of 800 titles.) Before that, I was an obsessive movie watcher and chronicler who had visions of penning a film star guidebook (which basically became irrelevant once IMDB was on its feet) and wrote reviews that simply went into a large binder and no further. The germ for this post came about in 1993, twenty-five years ago, when home computers were still fairly new to many people! I wrote about it first in a letter to a magazine editor back when people still did such things. 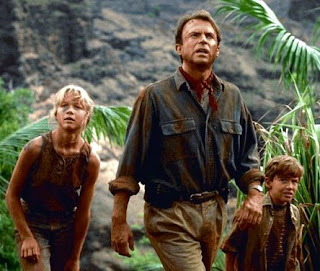 1993 was the year that Jurassic Park, about the invention of a theme park with real dinosaurs, hit theaters. It's ground- breaking special effects revolutionized the industry standard and the film quickly became the highest grossing film to date (unseated four years later by Titanic.) Thanks to re-releases and a 3D rendition, it still ranks #26 in the list of highest-grossing films of all time. I went to see it three times in the theater, so captivated was I by it at the time (though I don't know if I've ever so much as referenced it on this site before today!) But upon closer inspection, I began to get a feeling for why I liked it as much as I did, apart from the dinosaurs. There turned out to be a few pointed similarities to another favorite of mine, one which was the top-grossing film of its own year two decades prior. 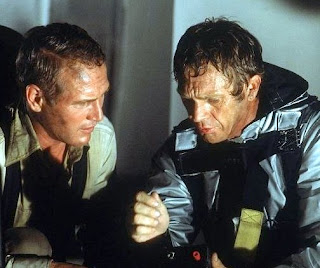 1974 was the year the world was presented with The Towering Inferno, a ground- breaking co-production between two studios, featuring an all-star cast trapped in a fiery high-rise. The gripping disaster blockbuster soared to the top of the box office that year, raking in nine times what it cost to make (and the budget hadn't been scant to start with!) My adoration of Inferno has been well-documented here over the years. I just watched it on Blu-Ray a week or two ago and, just as happens almost every time I see the nearly 3-hour film, as soon as it's over I have the urge to watch it again! Because I've always been so immersed in it since seeing it in the theater at age seven, its structure is ingrained in my mind. 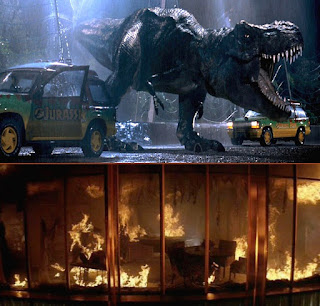 That's what the crux of this post is about. After seeing Jurassic Park, I began to notice that even though the two films seem, on the surface, to be about as different as night and day, they actually share a lot of commonality. This is likely due, more than anything else, to how simply formulaic Hollywood film-making was and is over its long history. Some of these things are no-brainers, some are a bit of a stretch, but all of it is meant to be just fun. I'm not trying to suggest plagiarism or anything of the kind here. Just pointing out a few of my own deranged thoughts. And away we go! 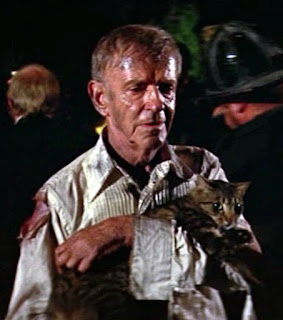 Were you surprised by any of this or did you find it interesting? Did I make a believer out of you at all? Have I forgotten anything? Look, I made it through the whole thing and never once tried to make a comparison out of the dinosaur bones of Jurassic Park and the premier fossil of The Towering Inferno, Fred Astaire! Ha ha! (Just kidding, we love you, Fred.) I drew these comparisons at a time when the 1970s disaster movie was being derided by many critics and film scholars (something that often holds true still today!) I wanted to make the point that even though people often looked down their noses at the disaster genre or omitted it from film history publications, it was actually still alive and well, but with a little tweaking. And, in due time, Hollywood returned to the disaster genre once more with things like Daylight (1996), Twister (1996), Volcano (1997), Dante's Peak (1997) and others, virtually all of which I loathed. Titanic was different. I enjoyed that one and saw it three times in release, too, though it ultimately was the film that sent me veering away from modern cinema when I realized just how much of it was CGI, a process I now avoid like the plague...
Posted by Poseidon3 at 11:24 AM 8 comments: 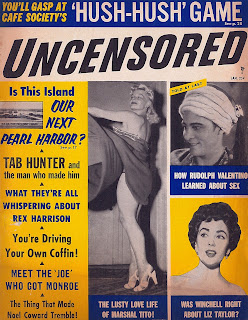 We're going "old school" today with our latest Fun Find. Usually our celebrity rags tend to be from the 1960s and '70s, but this one jumped out at me during a combination flea market-antique show in Dayton, Ohio, so I picked it up for $4.00. Unsensored magazine was one of many to dive into the wake of Confidential magazine, one of the most notorious and controversial tabloid publications of the 1950s. (Other imitators included Exposed, Hush-Hush, Revealed, The Lowdown and several more.) Most of the time, I turn magazine pages to pure black & white for aesthetic reasons, but because this one frequently employs the use of red throughout, I've left it in its somewhat yellowed glory.