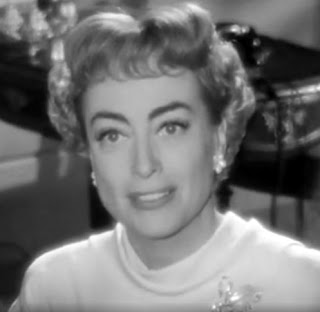 In 1955, Miss Joan Crawford was still in a position to headline a movie above the title (something she, in fact, clung to as a status symbol for the better part of her career), but her time atop Hollywood's highest heights (in the wake of her Oscar win for Mildred Pierce, 1945) was ticking slightly. Nevertheless, as an enduring, still-popular star, she continued to work on projects that highlighted her most famous assets. These include - among other things - her iron-willed, yet paradoxically tender, persona, her flair for eye-popping costumes and styling and those incredible eyes. In Queen Bee, which has been paid tribute in full here, she buzzes around a clatch of family and friends, handing out little stings whenever possible. Her husband in the movie was played by the rugged-faced Barry Sullivan (while her sister-in-law's fiance was portrayed by John Ireland, a man JC was having an actual romance with during the filming.) 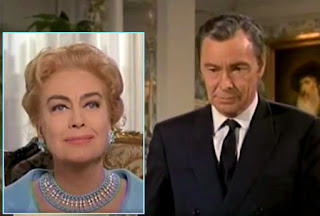 About fourteen years after having played battling spouses in Queen Bee, Crawford and Sullivan were reunited. The occasion was the 1969 pilot movie for Rod Serling's latest series offering Night Gallery. In it, he would appear before a framed piece of artwork and offer a brief introduction to a macabre or mysterious story with different stars each time. For this pilot, Crawford starred in the second of three tales. Hers was (aptly!) titled "Eyes." (This part had first been offered to Bette Davis, the possessor of even more famous eyes, who turned it down for some reason.) 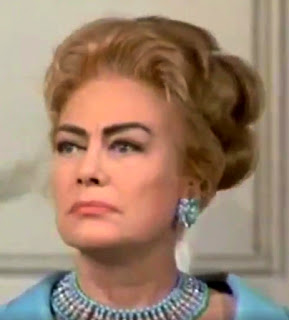 Crawford never approached any project halfway and upon being cast began practicing blindness at home (she had had brush with this sort of thing in 1952's This Woman is Dangerous as well.) As relayed by novice, 21 year-old director Steven Spielberg, in his very first professional assignment, he had the task of revealing to her that her latest project was to be helmed not by a seasoned veteran, but by a wet-behind-the-ears newcomer than no one had ever heard of! And it happened in the craziest way possible according to him. He went to her home where she was blindfolded and she had her first glimpse of him upon removing it! Despite some initial misgivings, the two wound up getting along famously and she turned in one of her very best latter-day performances. 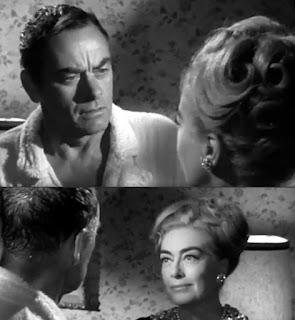 Incidentally, Crawford also met up with another of her Queen Bee costars, John Ireland, when the two of them were cast in I Saw What You Did (1965.) This time, instead of her calling all the shots, she's rather desperately in love with him, not knowing that he's just stabbed his wife to death!

That diamond necklace in the next to last pic is one of the jewelry pieces highlighted in her magnum opus "My Way of Life". It can be worn as a pendant, a brooch, or broken into two clips. (Take that, Sarah Coventry!)
By the way, did you know you should always be in full street makeup and wear earrings when trying on hats?

Given some of the unsavory stories about her, her open admiration for Stephen Spielberg is quite telling. It really is a shame she did not live to witness his remarkable career.

I just adore Joan Crawford especially her Hush Hush look. She was absolutely spot on with her approach to Miriam Deering. Bette Davis sure was a twat. In my opinion Joan was (still is) the greatest of them all. Noone worked harder to be a star to be Joan Crawford. I have to also say she is without a doubt the most maligned woman in all of Hollywood. She doesn't deserve the hate that is spewed constantly about her online. Sidenote: If there was another figure in the entertainent business just as maligned it would have to be Tina Louise from Gilligan's Island.

Fascinating, the pilot for Night Gallery could have been Bette Davis "Eyes"! I do notice her eyes often in movies. I love to see her in this period of the 60's, she looked so great and I actually love that apartment. Queen Bee is required viewing in my house, at least yearly I need to feel the sting. Great detail about looking up extending a jaw line, I will now sit on the floor when I talk to people. Thanks for this and stay healthy and sane

Dan, I love "My Way of Life," even better when listening to her speak it on the big ol' record album set she recorded! The same thing about makeup and earrings should also go when buying a wig. LOL! It impresses me that she stood up for Spielberg after those initial misgivings. And he in turn wound up admiring her, too.

Huttonmy710, When I see photos from "Hush, Hush" of Joan it makes me ache to see her in the movie!! I wish they could have slogged it out for the fans' sake. I don't hate Olivia in it. I even like the change of pace for her, but come on... Bette and Joan! I'm a big up-do person anyway, but JC's in the photos from HHSC are among the best!

Gingerguy, I hear you about the floor! Sometimes I'll go to take a pic with my cellphone camera and accidentally flip it to selfie mode while it's below me!! OMG!!! As Dorothy Zbornak said (not verbatum), "Remember Blanche, always on your back after 50!" Ha ha ha!!

I haven't seen this in ages, but this is the only "Night Gallery" episode I remember, other than a vague "moving picture dead person in cemetary?" one.

And that ending is brutal. And she was forever a STAR!!!

Forever1267, I think that other one you are recalling is the first story from the pilot, "Eyes" being the second. It had Roddy McDowall offing the owner of a large estate and then being terrorized by a painting which shows the dead man coming to get him. Then Roddy's servant, Ossie Davis, gets rid of Roddy, but has the same thing happen to him!

The only other one I remember is when Elsa Lanchester planted her thumb.

I have a request.Could you post something about Alain Delon? I mean some juicy stuff - something more about his being bi. I read he had a lot of men. Do you know some stories?

Both Davis and Dunaway were highly talented, determined people who were also temperamental, as many gifted people are. Actors have always been known for being emotional and temperamental, which is okay. If they weren't emotional, they would not be good actors. Be that as it may, the only thing that matters in the end is the believable characters they create, and the good performances they achieve.

Poseidon, that's the one! So, maybe, I've only seen the movie, and never the TV series. Parents probably thought it was too scary for little me.