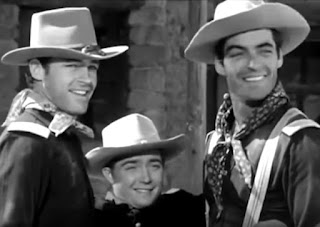 Over the years we've dedicated more than a bit of blog space to TV and movie stars in the bathtub. (We first turned on the faucet in 2011, with several others since.) In fact, we just did another post on the topic here. So I can't fathom how I never came across this gem before...! And since I do not have time for one of my regular marathon posts, nor do I wish to wait until I have more tub pics, I'm going to highlight it on its own today. 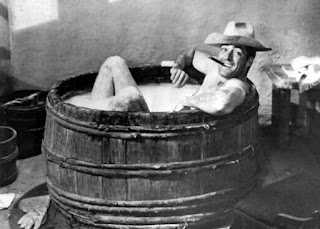 Now I did once post this pic from Massacre River (1949), but I never had seen the movie proper where it could be placed in context. 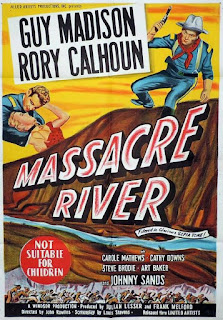 The movie's poster, rudimentary to say the least, gives no hint at all of the fun to be had within the first several minutes. 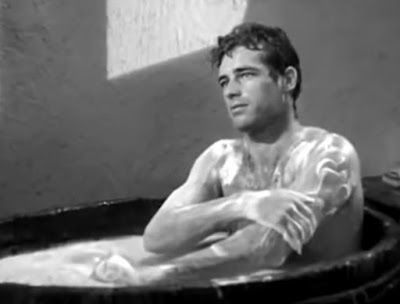 Calhoun, who'd been in jail as a youth (something which Confidential magazine turned into a cover story once he hit it big), was the more rugged of the two. Willson had nicknamed them "the thug and the sailor" while also taking note of their fast-forming compatibility. Here are a few more portraits of these two handsome leading men of the 1940s and 1950s cinema. 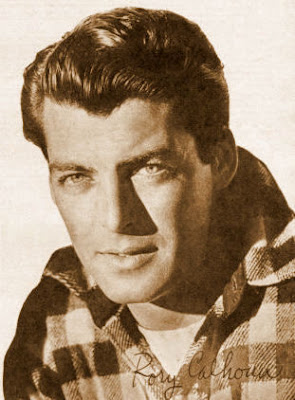 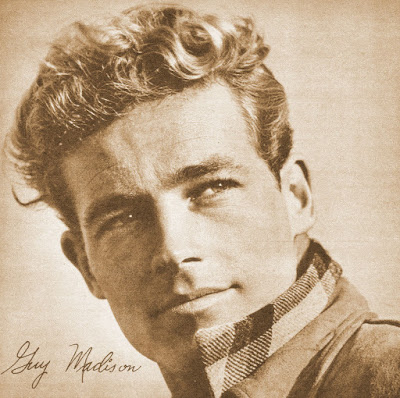 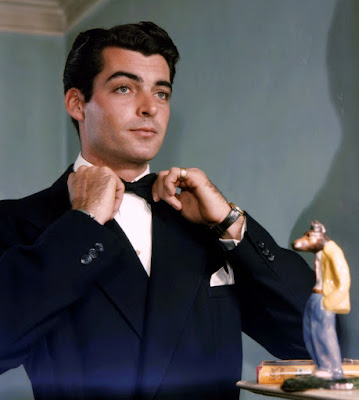 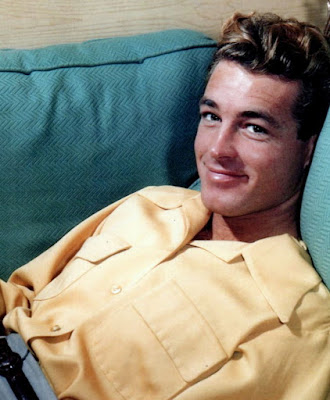 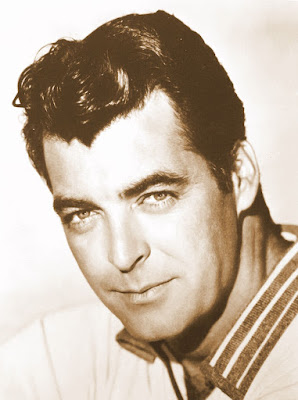 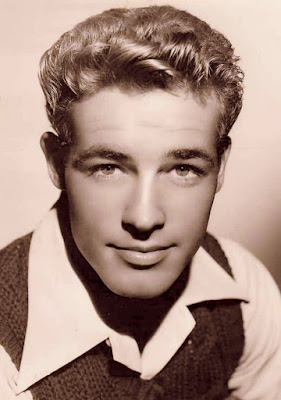 When I first looked at this I thought it was a chubby chaser episode of F Troop. That's what being locked up for weeks will do to you! Speaking of...you are very kind to feature this eye candy to all us homebound. These men are just gorgeous!

I'd heard about the Guy Madison-Rory Calhoun rumors, but didn't realize there was a film from around that time with a scene like this in it.

I haven't read Robert Hofler's book, so I can't say for sure this detail comes from it, but I did see a comment online somewhere about the story of Willson catching the two of them in the car.

This online comment added the detail that Willson said he knew Madison was lying about it being a "one-time thing" because Calhoun was so huge Madison would have needed to work up to taking him like that!

G Madison was such an anomaly of deliciousness amongst the many actors for the time. And his scenes in Since You Went Away he stole based on his looks alone, because his acting wasn’t that great. I always felt that Jennifer Jone’s character was insane for acting indifferent to him, but she had to for the central love story. He was so good looking in a modern sensibility, it was almost like he was post edited into the footage Forest Gump style.

They don't make them like that, anymore, (or if they do, they're covered in ugly tattoos). I guess that is one reason I prefer vintage movies. These two are gaw-jess!

I have seen the film and that scene is shockingly homo-erotic for a 40's film! The rest of it is a pretty standard Western/romance but there is the distraction of looking at those two beauties.

I'd heard the rumors about Guy before I read that book since his first marriage to poor doomed Gail Russell was apparently a lavender one and in reading about her I came across that fact. I was a bit more surprised about Rory until I'd read a bit more about what a randy sot he was and swung whichever way the wind blew.

Thanks for the lovely distraction in our large mutual lockdown. Stay safe!!

Rory's wife, Lita Baron, played Ricky's Cuban dance partner in an episode of "I Love Lucy" singing "The Lady in Red" and she was also in the episode when the Ricardos went to Cuba. She played one of his relatives and that is my trivia moment of the day.

That door knob in the screen shot of Rory looking out the door at the baths is positioned at just about the right spot!

I read the Hofler book years ago and the only thing that really stood out was that scene with Calhoun and Madison in the back seat of the car. Maybe because it was the first time I'd heard these rumors and it was something I never expected.

I've seen Rory's mug shot and he was pretty rough looking. Henry Wilson cleaned him up real good! I was a kid when my parents sent us to see The Colossus of Rhodes but I hardly remember him in it. I would be curious to see if his costumes showed much skin.

Well, they do say that cleanliness is next to godliness. As much fun as it is to see gorgeous men in as little as possible, there is something about that picture of Guy in the yellow shirt. I'm pretty sure that is what is known as a "come hither" look. Oh, to be hither!

When I come across scenes like this, I always wonder if the film makers are so straight they're oblivious to the homoerotic nature, or if they know and place the subtext in plain sight.

One thing I just noticed on the poster is that "Not Suitable For Children" blurb.

I'm pretty sure this means this was an Australian poster, because they used that round ratings blurb and that designation.

They also kept kids out of things that were fine in the US, as did the UK-- which had a ratings system decades before we did, and labeled things as innocuous as ABBOTT AND COSTELLO MEET FRANKENSTEIN as "X Certificate" banned to anyone under 16!

It would be interesting sometime to know if protecting children that thoroughly against anything at all even slightly untoward did any good in terms of developing more sensible, law-abiding, non-violent, non-predatory people. I like to think I'm a very law-abiding and non-violent person and yet my crazed mother took me to see "Death Wish," "Walking Tall," "The Trial of Billy Jack" and "Soldier Blue" when I was under 10! LOLOL She'd cover my eyes during the "bad parts" - either to no avail or to allow my imagination to be even worse than what was shown... It was just us and she wouldn't leave me, so she carted me along to these (then) hyper-violent movies with sexual attributes in many cases. I have to say they did scar me a bit, neuroses-wise. But I never wanted to go out and harm people.

If only there was OnlyFans back when Guy and Rory were struggling young starlets. Posei: my Mom used to schlepp me along to inappropriate films with her when I was a kid, too. I think it was easier and cheaper than paying or imposing on someone to keep me and she assumed I wouldn't get what was going on, anyway. Sometimes I was traumatized, but said nothing, as I loved going to the movies. As an adult, I got her back. I took her to see things like your last reviewed film, Love Me Deadly. Those flicks fried her hair worse than a cheap perm.

Ha ha ha, rigs!!! I'll have to look up what "OnlyFans" is! I'm such a geezer, especially with anything technology related. Your story about your mother made me recall one time my elderly grandmother going on and on about a movie she had watched on TV the prior night. She was intently describing the plot as if it were "Gentlemen's Agreement" or "All the King's Men" and my eyebrows grew higher and higher as she went on. Then the shoe dropped. She said, "It was called 'Prom Night'" -- !!!!!! I died. A slasher movie! LOLOL