Some Guys Have All the Luck!

I've mentioned before here how I, an almost complete idiot when it comes to computers (and maybe other things, too, but you don't have to say so!), took forever and a day to realize that I could examine the statistics of this blog to see which pages are most popular, which keywords brought people under the surface to The Underworld and which parts of the globe are looking at the site. You wouldn't believe some of the wild shit that comes up when I look at the keywords! Never mind that, though. What's really fascinating is that, far and away, the most popular person searched for that draws people here, in the past and now, for all time, without hesitation (!), is Linda Evans. 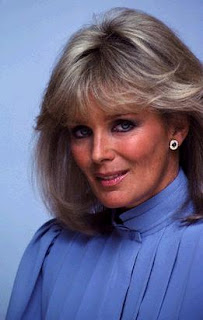 It blows my mind that of all the folks I've profiled, more people are sucked into the whirlpool of Poseidon's Underworld from their queries on Miss Evans than by any other person. No harm to her. If I didn't like her, I never would have posted about her. It's just surprising. (If anyone cares, the second most popular person when it comes to luring people here is Miss Diana Muldaur... again, I'm like, “Huh?” To give you an inkling, Muldaur is second, but she only gets 24% of the searches that Evans commands!) Anyway, another surprise comes in the fact that, while my posts about TV beefcake, bulges, speedos and bare chests are easily the most viewed posts here, right in there swinging in the top four is a posting I did in February of 2010 about three particular Guys. That capitalization isn't an accident. I mean three men all named “Guy!” For some reason, that post is really heavily visited. Again, the shot that attracts the most people is a surprising one, a simple head shot of Guy Stockwell. Maybe it's because there seems to be so little of him out there. You know... sometimes you just have to give the people what they want, so today I'm going to offer up more imagery of the gentlemen in question. I won't get into the biographical info because I did that the first time. This is just another photo essay with more shots of, in order, Guy Stockwell, Guy Williams and Guy Madison. In selecting the pics, I just tried to post the ones that I like for one reason or another, which is what I do for every post, and hope that you like them as well! Click to enlarge for the best quality. 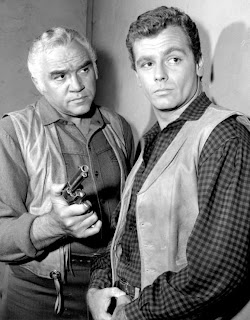 Mr. Stockwell is shown below during a guest shot on Bonanza with Lorne Greene, buried waist high in the sand in Beau Geste and next to his wife during the shooting of that same film. He's also shown accepting an honor along with Miss Jill St. John. Because he was not a humongous star, decent pictures of him are not easy to find, but hopefully these can make a few people out there happy until more are dug up. I have also added an additional photo at the top from The War Lord, in response to heavy demand for images of Guy in that little-seen film. 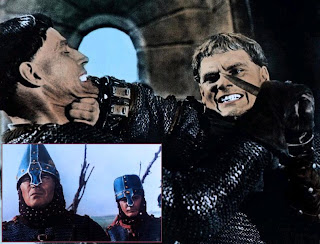 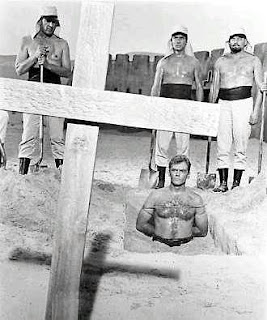 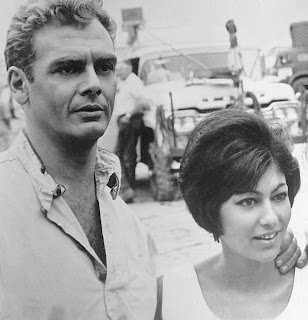 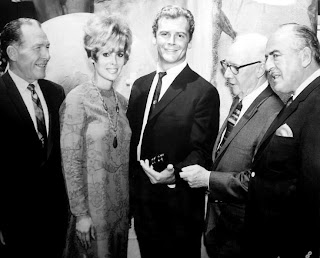 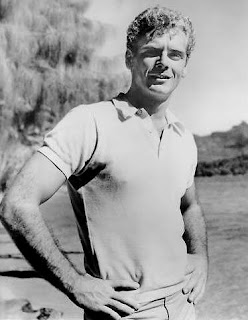 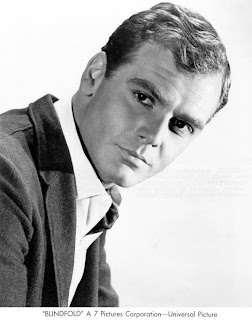 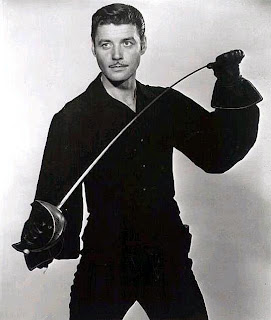 Next is Mr. Williams, hero of Zorro and Lost in Space. Williams was not one to strip down much, if at all, but when he made the sword & sandal epic Damon and Pythias, at least we got some leg. There's a scene in which he plops down onto a seat and his skirt flies up, offering what seems to be a shot of his balls! However, as we learn later when he's frantically riding a horse, he has crisp white jockey shorts on under his tunic. (Sorry these caps are blurry, but they're the best I could do!) Incidentally, if you look at some of his pants, especially the grey ones worn with the white shirt, you'll see that he religiously "dressed left." 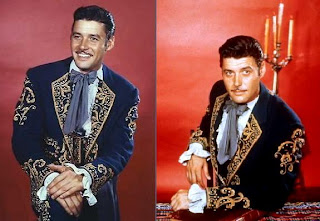 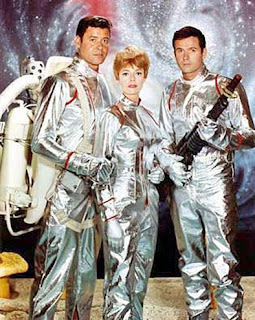 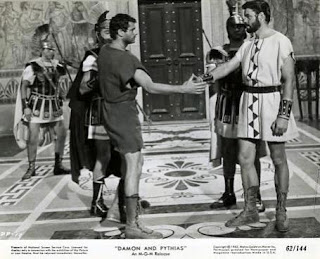 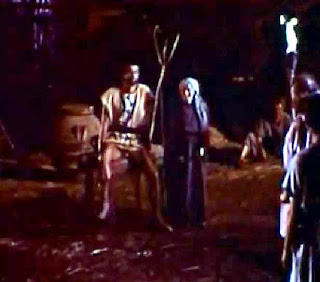 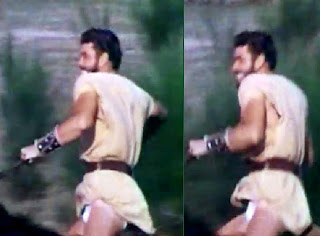 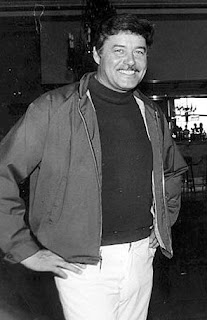 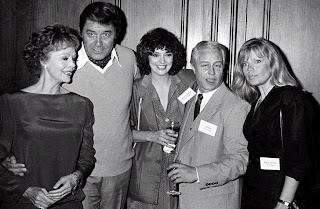 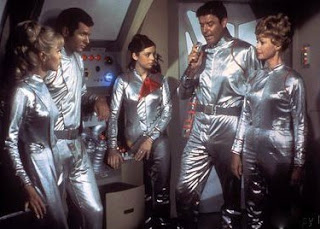 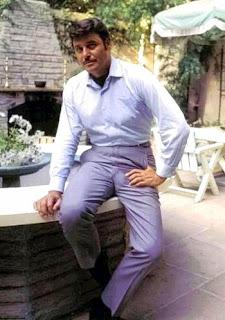 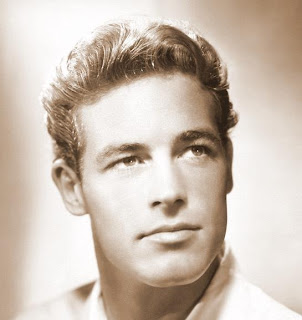 Finally, Mr. Madison. I think the sepia-toned shot just below may be my favorite photo ever of Madison's face. The color photo at the bottom in the green shirt and tie is right up there, too. What a great looking man, whether buttoned up or shucked down... 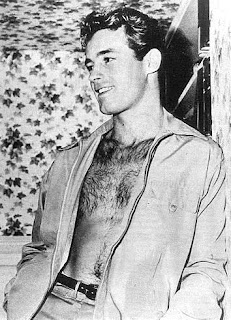 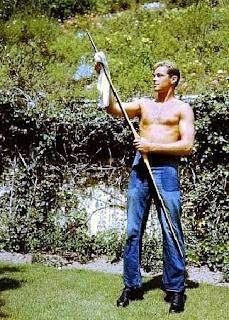 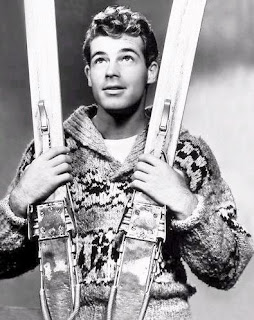 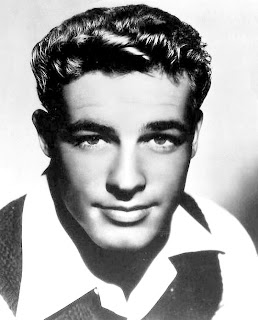 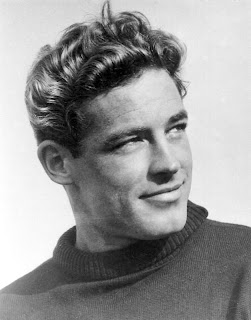 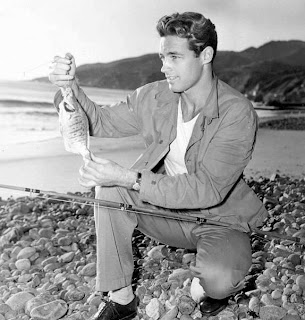 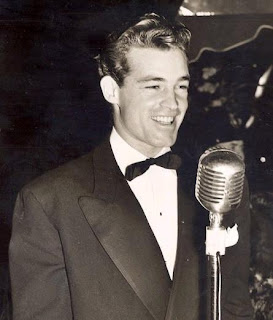 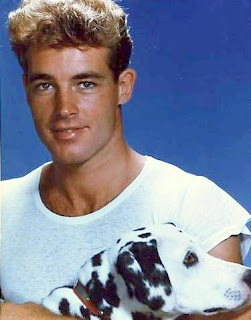 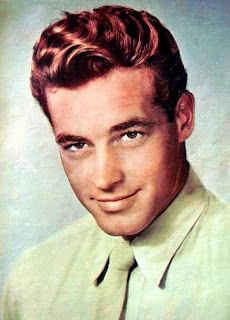 Linda Evans? Really? I have nothing against her but I could probably be happy spending the rest of my life w/o reading about her again. Funny about Diana Muldaur. Another site just mentioned the old "Year in the Life" TV series and I added to the limited info by referencing Richard Kiley's wooing of Miss Muldaur in it.

Guy Madison has always been a particular favorite. He had a very contermporary-looking build and that chest hair was to die for. Never knew much about Guy Stockwell but once again you come through with a chest shot. Pretty attractive man. Guy Williams I only know from LIS and he always paled in comparison with Mark Goddard.

I definitely was a Mark Goddard lover, too. It drove me nuts that Dr. Smith, the Robot and the kid took over the show....

Dear Mr. Poseidon
I came back to your site and was rather surprised to find the above post. Maybe I can give you some explanation for the "rush" on the previous post about Guy Stockwell. For medieval "addicts" the film "the War Lord" is like some kind of Holy Graal; the kind of forgotten masterpiece that all medieval fans have heard about, without ever having seen it. It is never on TV, extremely dificult to find in DVD. After years I finally got to watch it in a "pirat" very bad copy from the Pirat Bay. Then I went through all the medieval forums I know asking if somebody knew something about Guy Stockwell. No medieval addict knew anything about him, except his brilliant role in the War lord. In the internet informations were very scarce about him, and your blog was one of the two blogs which gave some consistant informations about this actor. So in all the medieval forums I know I put the link of your page. And here is your page (and photos) among debates about chain mail hauberks, ring amours, crossbows, and also more mundane subjects as "Who is the best knight in the films?" (if your answer is Robert Wagner in "Prince Valiant" be ready to face a few enemies...)
So if you get a few cliks from France and Spain that is (maybe) due to your link that I put all over these medieval forums. It is true it is rather bizarre all these people (and me) passinated by the Dark Ages (i.e. The Middle Age) and who fancy to dress in medieval outfits. If you want I can delete your link in these forums.
Sorry for this long answer.
By the way what is an "humongous star". I have no idea at all...

Ana Maria, thanks for taking the time to explain and to enlighten me on all the "Guy love!" It all makes sense now. I saw The War Lord on American Cable TV about sixteen years ago or so and have never seen it anywhere again. It is indeed scarce. I know Charlton Heston poured his heart and soul into it and was disappointed with how it was received (though I believe he saw it as more of a love story than an action movie.)

When I use the term "humongous" here, I just mean big, huge, massive. He wasn't a big star like Robert Redford, Paul Newman or Clint Eastwood, for example. It's truly not easy to find a lot about Guy Stockwell! That said, in response to your comment above, I have gone in and added an additional photo of Stockwell from The War Lord. I hope you and your pals like it, though it's probably been seen before. I aim to please!

Dear Mr. Poseidon
Tank you for your answer and photos. I did not know most of these photos of Guy Stockwell and about the photo for the War Lord : I copied it and put it through all the "walls" of the medieval forums.
I did not know, too, the photo from "Blindfold". As one of your readers wrote Guy Stockwell was a "pretty attractive" man. I saw him in "Blindfold" (thanks Youtube). A reallly pleasant comedy. G. Stockwell plays the intelligent but paranoiac villain in opposition to the heroe : the elegant Rock Hudson who seduces the charming Claudia Cardinale. Not a great film but a good film, with all the charming elegance (in fashion and surroundings) of the mid 60's. (As you see I am not always glued in the Dark Ages).

By the way I am not surprised that Linda Evans got a "rush" in your blog. I just know her by "Dynasty", but I still vividly remember her perfect elegance and intense charm.

And, also, thank you for the photos of Guy Madison. He was not a great actor, but such a "candy for the eyes" : soft, smooth, gentle. A really nice change from bad tempered, rugged, cynical (but nevertheless attractive) knights...

Sorry for this endless answer.