Disaster Night at the Oscars! 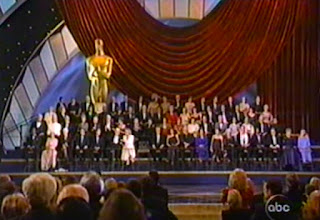 No, I don't mean the night somebody won who ought not to have (that would be too much for even me to write about!) I'm referring to the 70th annual ceremony (1998) in which the Academy revealed "Oscar's Family Album," a collection of seventy past Oscar-winning actors and actresses all on stage together. It was the largest gathering of winners to have been herded together since the 50th ceremony in 1978. Since so many of my beloved disaster movies of the 1970s happened to feature Oscar-winners in a bid to validate them artistically, this assortment contained many of the stars I adore (and who belong to that imaginary Disaster Movie Club of mine, a fraternity of players who worked in the genre.) All of this plays into my love of actors being introduced one-by-one and being placed in arrangements like statues. LOL (I apologize in advance for the sub-par picture quality.) Here is a recap of who was in attendance!

It was so fun to have seventeen of my disaster movie celebrities all gathered together on stage. Interesting, too, but probably only to me, that Borgnine and Buttons were seated together alphabetically after having co-starred in two of these films together. And behind Jennifer Jones (in taupe silk) was her Towering co-star Faye Dunaway. But there were also a couple of what I refer to as "Honorary Disaster Movie Club" members: 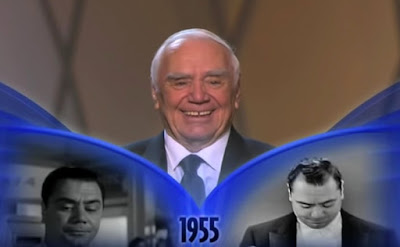 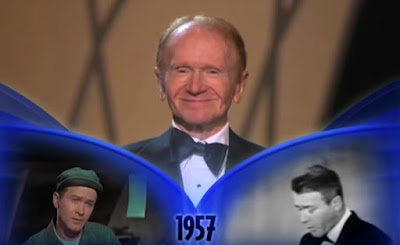 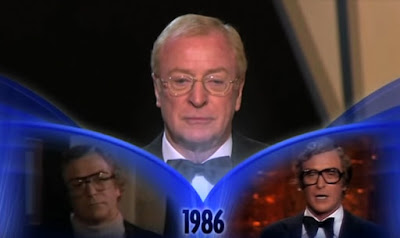 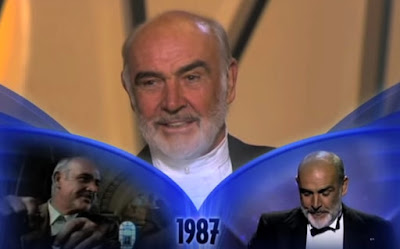 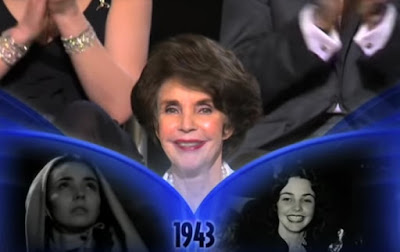 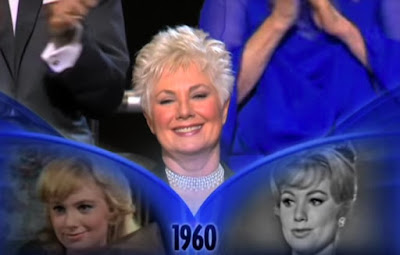 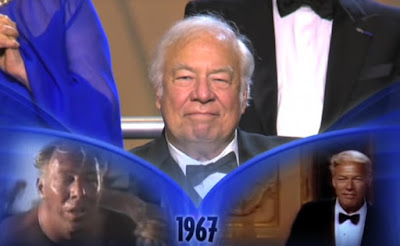 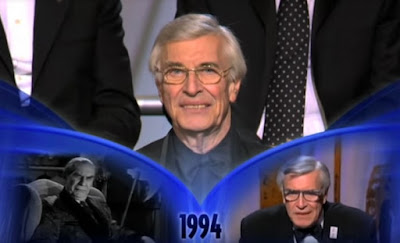 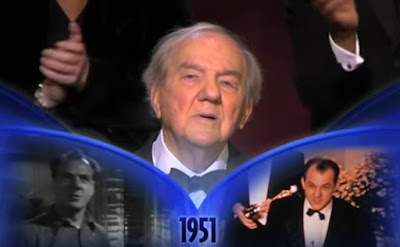 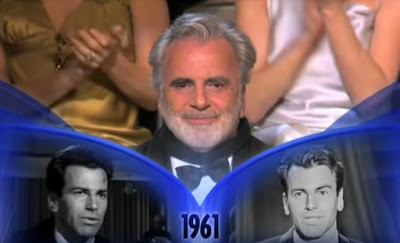 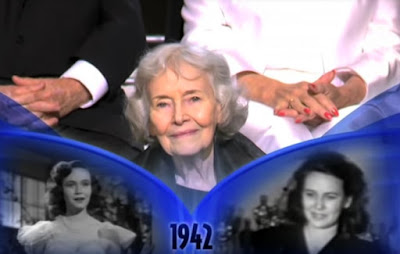 Another wonderful post, Poseidon: those times when beloved entertainers are honored always fill me with joy and choke me up at the same time. Your post’s mention of the honorary members of your Disaster Movie Club made me realize that the vast majority of the disaster movies I’ve seen were when they aired on television. I’m not sure I could accurately guess which films were cinematic and which were made-for-television (especially during the waning days of that trend). So the honorary status for those television flick performers is much appreciated. (Special thanks for Maximillian Schell’s inclusion.)

As a fan of All the King’s Men in general and Mercedes McCambridge in particular I picked up her memoir at a used bookstore in the early 90s. In those pre-Wikipedia days checking on a person’s status was not so easy. Flash forward to 1998 and I was delighted to see Miss McCambridge on-stage. I dashed off a fan letter but never got a response. Whether that was because I sent it c/o the Academy and they didn’t forward it or because I started it off with (paraphrased “I assumed you were dead and imagine my surprise that you are not” remains an open question.

Ditto on Maximilian Schell, he really kept his looks. They have tweaked the format of the Oscars so many times now I can hardly remember what was when. This initially made me think of the year that they had a sort of superhero tribunal of former winners to comment on the winner? I like this idea much better and seeing Olivia de Havilland just makes me smile. I just adore her and was a little upset when she tumbled head over heels to her death in "The Swarm" she has outlived everything. You blew my mind that GWTW is 80 years ago. I have to look up what Sean Connery won an Oscar for, it doesn't ring a bell. Some of those disaster movies, for me only, hold up better than others but thrilling to see all of these stars together.

Hey, SonofaBuck, thanks for commenting and sharing your feelings. When you think about how many movie performers were thrust into the limelight through a big publicity build-up or a key role that others wanted, yet who soon after faded from view, you have to give it to those who really LASTED in a cut-throat business. Even as I say that, these Oscar tributes do sometimes include people who you've long since forgotten except that they keep coming back for their 7 seconds in the sun. LOL

F. Nomen! Hilarious!! I think I first saw Mercedes in "The Concorde" or perhaps on an ep of "Charlie's Angels." Talk about meeting someone at the back door...! Later, I saw "Giant" and "Johnny Guitar" and (much later) "All the King's Men" and could appreciate her better. Hers is one book I have yet to read. I'll have to keep an eye out for it.

Gingerguy, I have pics on this site of poor Liv lying dead, covered in real bees, but they never used the shot in the film! I'd have been pissed to go through that and then not have it shown. She is AMAZING. I still smile anytime I think of her interviews in an Errol Flynn documentary about a decade or two ago. She was charm incarnate and still sharp. You've probably already seen that Sean won for "The Untouchables," a movie I didn't hate, but could not get into...

I can't quite wrap my mind around the fact that someone who was above-title billed in a film from 1935 is still with us! When she moves on to the next plane, it'll be a sad day in my household--since, for all intents and purposes, she really is THE final "classic immortal" film star still living. She's always been the picture of grace and gentility. And I'm firmly on "Team Olivia" vs. "Team Joan," whom I once met in the 1980s and witnessed being drunk and belligerent. Viva Olivia1

Needless to say I couldn't agree more with your assessment of Olivia and her legacy. Though I don't dislike Joan, I think Olivia ultimately had the most impact on screen. Joan could be a very cosmopolitan and entertaining interview subject - and maybe Olivia was not always sunshine and light in real life. Who knows... I enjoy both of them. Luise Rainer lived forever, too, but didn't have a fraction of the cinematic output that Liv did. Thanks for commenting!

That's right! I forgot about that. And I do think Vanessa Redgrave of all people ended up in that one, too.

Someone must've sold Olivia a bill of goods to get her to participate in that bee movie. Fontaine did The Witches (or The Devil's Own) and while it didn't do her any favors (it was her final film) it wasn't a big fiasco. Although it seems that fortunately doing the bee film hasn't tarnished Olivia's legacy (when one thinks about her one thinks of the many classics she did).

Huttonmy710, Olivia fell prey to a little bit of award greediness (for lack of a better word) on that one. Irwin Allen had invited her to play the artist Mrs. Mueller in "The Towering Inferno" and she declined. Then Jennifer Jones did it and won a Golden Globe (and came close to another Oscar nomination.) So when Allen came calling again in what looked like it might be another roaring spectacular, she decided to be a part of it. Trouble was, even though it was written by the same man and had another ton of stars and a rousing musical score, it was DIRECTED by Allen himself and so any chance of meaningful acting or award-caliber storytelling was out the window. He was a great producer, but a highly pedestrian director. (And when he tried to get artsy, as in Olivia's slow-motion groan at the sight of the bees, it was more disastrous than the calamity in the movie! LOL) Incidentally, Olivia's sister Joan worked for Allen in his successful adventure flick "Voyage to the Bottom of the Sea" (1961) which led to the hit series! I agree that de Havilland's reputation has survived "The Swarm," but she'd probably prefer if it weren't brought up too much. Ha ha!