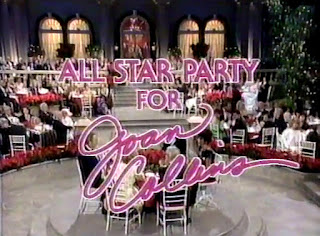 One can usually tell when my personal life is filled to the brim with activity because that's when the posts turn more towards collections of screencaps than in-depth articles and tributes. And, yes, it's happened again what with Memorial Day weekend activities and other commitments. So, in order to keep things brewing for the time being, we give you another of the televised All-Star Party celebrations such as we previously covered for Clint Eastwood and Lucille Ball. This one, the twelfth of such galas, was to honor Joan Collins who, considering other honorees such as John Wayne, Frank Sinatra, Ingrid Bergman and others, was in fine company indeed! The hour-long broadcast contained tributes in story and song for our Miss Collins while a crowd of celebrities peered out from around rows of voluminous poinsettias. 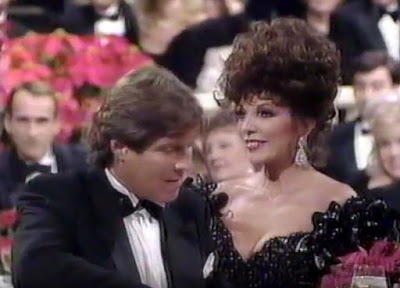 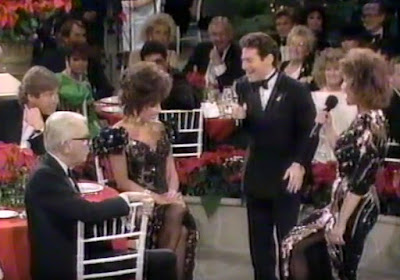 "I mean this dress is truly just bad. As if the pilgrims had a ladies football team." Love it!

Really scary tidbit about James Healy, who does look like he's about to stab someone with a cocktail fork any moment.

Nice to see Jackie Joseph in there, but let's not forget she was the original Audrey in "The Lttle Shop of Horrors" (the original Roger Corman cult film).

Also, Joan's request to feature Tony Melendez was really touching, typical of her good works (despite her very different on-screen persona as, well, "The Bitch").

I'll have to disagree with the ugly glasses comment, they have made a bigger and uglier comeback in 2019. Have seen quite a few of the oversized round or visor shaped black coke bottle numbers on lots of visually challenged stars (off the top of my head Michelle Viasge, Lee Delaria, Rex Reed). Why oh why??? And, not surprisingly, notably absent are Linda Evans and John Forsythe. I bet they were home sticking pins in their JC dolls.

Loved this and will look for it. I have a friend who eats this stuff up to th e horror of his Husband. I just read a nice story about Joan by Dominick Dunne. When he moved to L.A. he had a house on the beach and one day a beautiful girl knocked on the door and asked to use the ladies room. He became friends with both her and her Sister, who looks gorgeous here too.
I can't remember James Healy but you know I will be looking that up pronto.
Who is the old lady next to Bea Arthur? she looks a little like Margaret Hamilton but you would have mentioned that I think.
Michael Feinstein is a "steward of the American Songbook" according to him and a staple of cabaret, I am flabbergasted he crossed over to TV especially a glitzy 'do like this. He is also in "The Two Mrs Grenvilles" playing piano and singing.
I laughed at your memory of being blinded by the glasses. I actually like big retro frames and wear them often,but all that glass magnifies the wrinkles and the bags as you can see on these folks.
Michael Nader is hot hot hot.
So impressed with the background on Jackie Joseph. Melody had such a distinctive voice.
Wait! Nicolette Sheridan is Alexis?? I hadn't heard but don't watch the new version. Good for her, Those are some big heels to fill. Joan has had an amazing career, longevity, and kept her looks. What a treasure.

Hopefully the lady next to Bea Arthur isn't Margaret Hamilton, because she'd been dead for a couple of years by the time this was taped! Sure looks like her, though.

So much fun to go down memory lane again! Although with all these high toned stars maybe it's memory boulevard!

I would love to think the picture of Bea Arthur and James Stewart at the table are the 2 of them singing "Ev'ry Body Today Is Turning On", the drug song she did with Rock Hudson! I giggle thinking of Jimmy saying those lyrics!

As I scrolled down the picture of Monte Hall, Joan, and Clint the first thing that popped in my mind was Joan saying, "I'll take door number 2!". The look on her face in the picture makes it seem like she's actually picking that door!

Gingerguy asked about the old lady next to Bea Arthur and she sure does remind me of someone. She looks like one of those character actresses who played the mother of the Mafia don or the grandmother of the young guy with a future as a concert violinist who's fighting the street gangs on shows like Murder She Wrote.

I've been wearing glasses since junior high and once out of my parents clutches I have always thought of frames as a fashion accessory. Back in the 80's it was classic plastic horn rimmed glasses in "interesting" colors, NEVER the over sized aviators and tinted lenses that were popular! Since then I go for the extreme shapes and colors and let the general public catch up with me! I'm not TOO self absorbed! Now that I'm in my mid sixties and the beard and hair on the head (Thank God!) is silver/white I'm drawn to big chunky frames in black! Like Swifty Lazar in the old days and Iris Apfel now. But your anecdote about the glasses in the audience is hilarious! Fellini would use that image!

Gordon Thomson! I saw a picture of him in tiny shorts and a big package years ago so I clicked on your link to him and got to read your wonderful post about Leann Hunley. Never knew her name but never forgot seeing her back in those days. Loved her! But Gordon with his perfect, breathy diction could have wrapped me around his large (by the look of those shorts) finger!

I love these old "events" with the stars because you could never see them in this day and age. The odd cross section of people I feel would never happen now. It seems like people are too aware of their career choices.

hsc, glad you got a kick out of this. Do you know I've never seen the original LSOH?? I think it's because it was in the public domain and any time I saw it on cheap VHS or whatever it looked like terrible video quality. Maybe someday. And I think that there were even worse frames of James Healey I could have chosen, but he was even less recognizable. Note how three people around him are smiling and he's sitting there all sour!

loulou, perhaps I just haven't been focusing on eyeglasses since there are so many other new things people do nowadays to make themselves reprehensibly unappealing. LOL And, yes, it was a bit glaring of Linda and John to not have been there, but several of the younger folks from "Dynasty" were on hand, who clearly enjoyed JC.

Gingerguy, there is a link to this program in the opening paragraph if you want to watch it sometime. Without commercials it's only @ 40-something minutes long. That is neat about Dominick Dunne. I can scarcely imagine anyone in 2019 knocking on a door to use a person's restroom! I thought Nader looked great here, too, but sadly he had his own severe problems not terribly long after this... I am shocked that you don't know about Nicolette! I don't watch the show either. After 20 minutes of one episode I was done forever. But it's about to enjoy a third season......

Klee! LOL Well... This was around the time that things were getting a bit dicey. Joan appealing for pay closer to that of John after the show hit #1, much thanks to her. A few feathers were ruffled. And "Fallon II" was on "The Colbys" still. Emma and Joan got on very well once she came to "Dynasty" proper soon after this.

hsc and Gingerguy, I really don't know who that old lady is! I only saw her that one time. I first wondered maybe Molly Picon, but no... Hard telling!

BrianB, hilarious remarks...! Everything you had to say was interesting and thought-provoking. I really miss things like this with the Hollywood Waxworks coming together and mingling with the newbies. You know, Joan was pretty close with Swifty Lazar. I believe he was - at least for a time - her literary agent and we all know there was quite a blowup at Random House with that, but I think at this point in 1987 there weren't AS well acquainted or perhaps he'd have been there. I'm so happy that you read and liked the Leann Hunley tribute. I had to stop myself from putting more pictures of her from this in the lineup! Something about her jawline and lips and eyes and hair (!) as she's in repose. I just loved her... She and Gordon made a great couple, but the storyline just kept them in constant turmoil (and I hated the way their story ended.) Oh well. Thanks for the comments!

Delightful! Thanks for doing these!