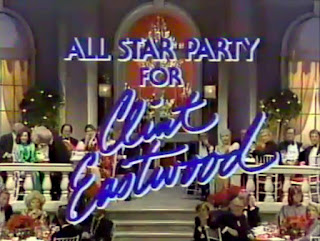 Happy New Year, my loves. Your webmaster has been busy as usual thanks to end of year details at work, a string of holiday engage- ments and, if we're being honest, a bit of a health crisis which hopefully is behind me as we kick off 2019. In our convalescence, we stumbled upon some televised programming that is right up our alley. That is, glitzy, celebrity-laden, 1980s craziness in which we can not only see some stars who are featured in the program, but also play "spot the star" during brief cutaways from the action. These specials were called "All-Star Party for _____ _____" and the first one we're looking at was for Mr. Clint Eastwood in 1986. 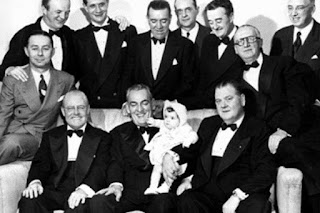 The Variety Club, founded in 1927 by eleven show business- men in Pittsburgh, PA, soon found itself in the throes of a bizarre situation when a woman left a month-old baby named Catherine on the steps of their building claiming she could not care for her as she had eight other children (!) at home and had heard of the generosity of show people. 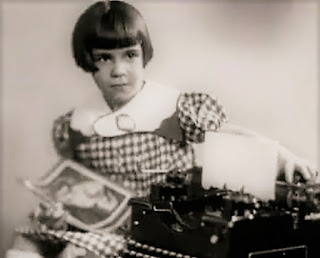 The club proceeded to care for the child's financial welfare and education, naming her Catherine Variety Sheridan (after the group itself and the theatre building where she was left) and she was ultimately adopted at age six. From that initial act of kindness grew a considerable charity organization. By the 1970s, the California chapter was packed with stars who threw an annual bash on an unsuspecting member of the club and dedicated a hospital wing in that person's name. The ceremony was often televised and included intimate musical performances and tributes from friends and costars. 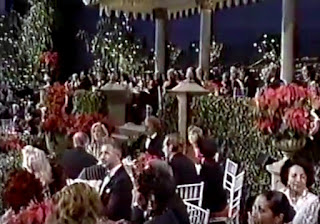 What is a real hoot for me is that a) the decor of the set is ornate and "glamor- ous," putting me in the mind of The Promenade Room from The Towering Inferno, especially since everyone is in evening wear, b) the combinations of people you might not ordinarily expect to see together is fascinating and c) since the place is done up with so much shrubbery and hedgerows, it's almost like a Hollywood version of a cabbage patch, with famous heads popping up here and there to get a look at what's going on around them! Only a handful of people officially entertained, so you have to look quickly while you can for glimpses of the other stars on-hand. Naturally, I've gone to the trouble of doing this for you, my loyal friends!

This was a nice treat Poseidon! I wanna know who that is sitting next to George Peppard, behind Marsha Mason. Somehow, I had no idea Dick Martin was married to Dolly Read. And I surprised at what a looker Frederic Prinz von Anhalt was. Thanks for the post!

I do not remember these shows at all, but that was back when I could stay awake past 9:30 pm, so we'll assume I had better things to do.
Interesting to see what passed for glamour back then. I wonder if the guests were supplied with machetes to hack their way to the dais?
I think Clint looks mighty good here - reminds me a bit of Sam Rockwell in "Three Billboards". Of all the folks shown here, he is about the only one still with us.

What a nice surprise this was. Thanks for posting and I hope you are feeling better!

A, I agree. In retrospect, Prince Frederic was lookin' pretty good! As for the mystery man, I'm afraid I have no clue. There was a chic blonde lady in-between Peppard and him and I couldn't see if there was anyone else between him and Earl Holliman (whose date he might have been! LOL) Lucy made a remark that Clint loaded down the room with many of the tech crew and staff from many of his films in lieu of celebrity friends and that they were sprinkled throughout, so maybe he's a behind-the-scenes guy.

D ODay, that is hysterical about the machetes...! I mean, the room was just ridiculous! Why obscure peoples' views even further in a crowded room?! They were like hedge cubicles or something.

I am late to the party and hope I can still get a seat next to Joan Van Ark.
The shrubs look exactly like Towering Inferno!
Clint is gorgeous here and I would have thought he was Methuselah back then. I was just looking at a billboard for "The Mule" and thinking that for 90 he had a great profile.
I loved Cary Grant's glasses back then, now I wear thick black frames but unfortunately not as well as he did.
Love the wedding guest table combos. they probably didn't know where to put Marjoe.
Prince Charming is hot! I always thought gay but there is controversy about that.
I forgot Dick Martin married Miss "Carrie Nation" she was a playmate of the year. The cigarettes dangling are a scream.
Lol wessonality Poseidon. This had a sweet beginning and end, very fun read.

Ginge, I am screaming....! Can you imagine if that room had caught fire?! Suddenly Roz Kelly, Jayne Kennedy and Howard Hesseman would have instantly become A-List stars for lack of competition. Speaking of, Cary and his glasses might have made quite a James Duncan (William Holden's part) in TTI and a real change of pace for him. Somehow I can see him cursing a fluently, though. I used to see Dolly Martin on "Match Game" reruns and didn't equate her with Dolly Read...! That's a real interesting marital match, right? She had a great sense of humor, which probably came in handy.