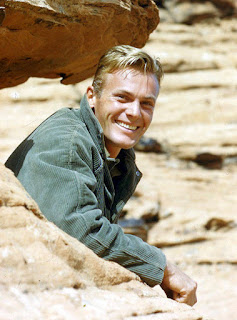 We're in mourning (and even a bit of shock) today because we've learned about the passing of one of our all-time favorites Mr. Tab Hunter. The gleaming golden boy of 1950s and '60s cinema died last evening of complications from a blood clot, just days before his 87th birthday which would have been Wednesday, July 11th. If Clint Walker was our burly, brawny, brunette ideal, then Tab was our most cherished on the flip side; a lean, bronze, smooth, blond Adonis who was always - in our mind anyway - far more handsome than his one-time competitor Troy Donahue. Hunter also sought - and as far as we're concerned succeeded - to expand his viability and improve his craft as an actor and was practically always underrated in that regard. He had a recent resurgence of interest thanks to a beautifully crafted documentary on his life and career (based upon his 2005 autobiography) Tab Hunter Confidential (2015.) Stomped on by Hollywood (and Hollywood "journalists") more than once, he endured to live what ultimately became a happy, satisfying life with a partner of thirty-five years. We salute him for the many hours of watching (and ogling!) his surprisingly lengthy filmography and series of TV appearances over the course of his career. Here now are some carefully-selected photos from various points in his life. 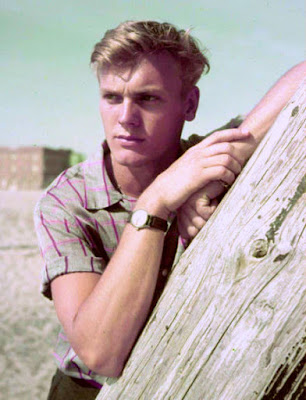 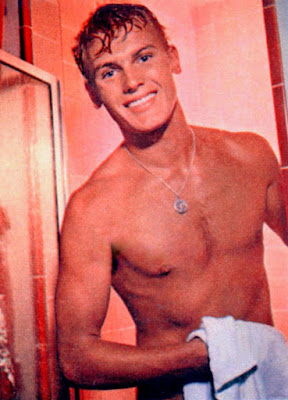 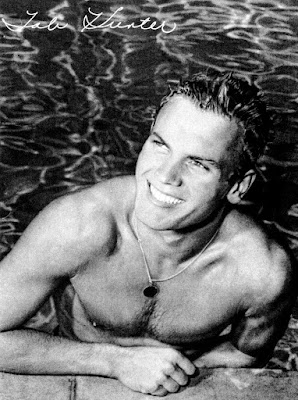 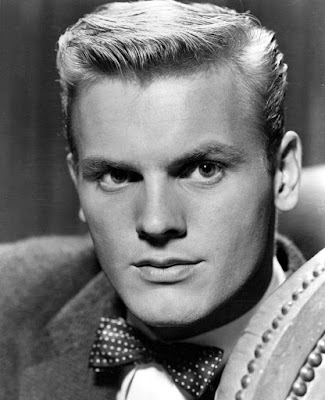 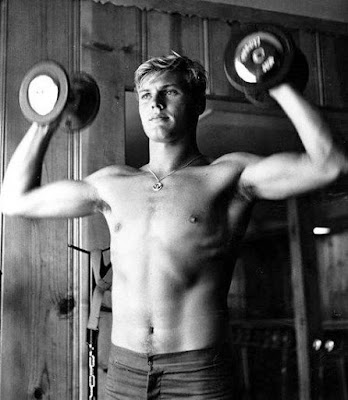 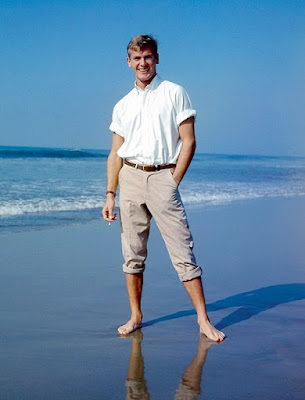 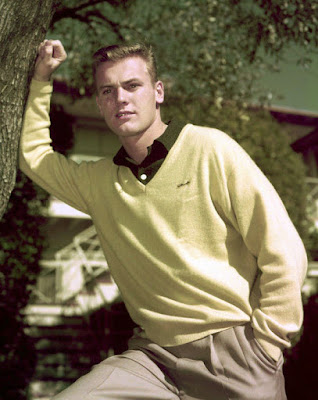 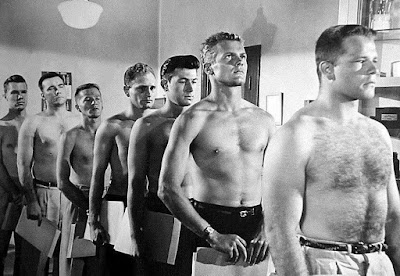 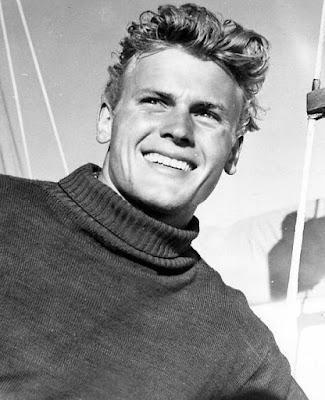 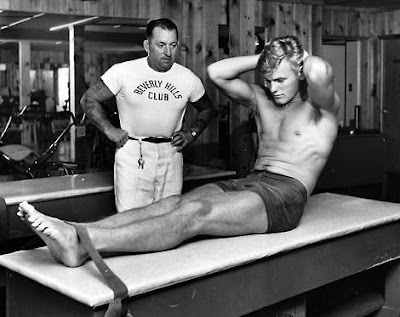 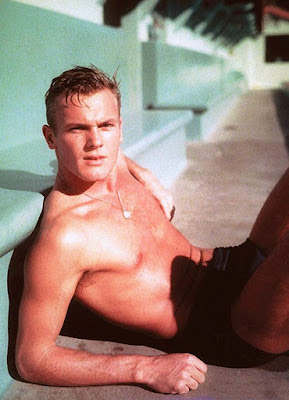 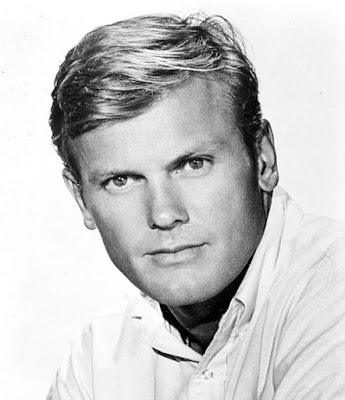 Nice packages on him and Rudolph Nureyev! Wow!

Looks like Tab Jr and Rudy Jr had a mutual attraction as well.
I agree Tab got more interesting with age, his attraction based more on character than just "prettiness". Loved him in "Polyester" - not many would have the confidence to take on an almost self mocking role. Farewell and thanks, Tab.

The fact that Tab Hunter agreed to play 'Todd Tomorrow,' Divine's love interest in "Polyester" speaks volumes regarding his own self-image--and the fact that he didn't really care what anyone thought of his "viability" as a leading man at that point in his career. That took some guts on his part--since in 1981, actors whose sexuality was as gossiped about as his (he wasn't 'out' yet) were not exactly lining up to play love scenes with a 300-pound male actor. After reading his autobiography, seeing the excellent documentary on him that you mention--and even meeting and speaking to him once, about 20 years ago, he seemed to have achieved happiness and peace-of-mind. He was a gentleman...and one of the great beauties of the 20th century (and beyond). And, yes, highly-underrated. Thank you for the tribute, Poseidon!

Its beyond me he never caught hiv or,std . So he must been.doing somethin right. Wow its hard to believe one of last is gone to heaven.

Sigh, I will miss Arthur Kelm...

Hey Poseidon,
As always, affectionate and articulate words for when a show biz favorite passes...this one caught me by surprise. Tab always seemed to be a perennially busy and healthy guy!

I was curious to see his reaction and input into the upcoming film of Hunter's romance with Anthony Perkins, starring Andrew Garfield. Think Tab's partner is producing.

Speaking of those studio arranged "dates," I always felt sorry for the poor starlets who got to be the lame duck! Norma looks just as bored as the boys! However, stars like Natalie Wood ended up becoming pals with Tab.

Beautiful tribute, Poseidon, and agree that Tab aged wonderfully, and ended up living a wonderful life.

Hi Alan. I'm glad you took away something memorable from this. LOL

D ODay, no keeping them apart, apparently. A "magnetic" attraction!

Gregory, how neat and wonderful that you were able to meet him! I know he took some heat about how long he stayed "in," but - for one thing - when a person is studio-trained for years to hide who they are, it's probably doubly hard to break out and also, by the time he was about ready to come out, AIDS turned the world, even the supposedly liberal Hollywood world, into a homophobic nightmare. Few public figures would have wanted to publicly come out in that atmosphere. (And few did!)

Titan, I think he addressed this in his book. He cited the fact that he was a top and that (despite being almost anyone's idea of a fantasy lover) he was not very promiscuous. He was actually quite shy and even insecure. Frankly, I think he generally preferred horses to people - with a couple of exceptions - until he met his partner in 1983.

Rick, I understand that Tab was still very active, going on the TCM cruise and taking part in all those activities as well as heading to NYC to see "The Boys in the Band." His time really wasn't up... Thanks!

This is a beautiful tribute, he was glorious in photos and on film. His features, complexion, and hair are a perfect golden harmony. I was just reading his obit, and read that he wrote his autobio with Eddie Muller, Mr Noir Alley from TCM. That sounds like a fun job. I was wide eyed with wonder when I saw "Polyester" as a teen, and idolized everyone in it. It was only later his career rewound for me as I learned to love older films. He seemed to be a really nice guy, I have always found Tony Perkins odd, but the Tab connection makes me think he must have been alright. Lovely send off Poseidon.

Such a beauty, thanks for the tribute. I can't say I remember any of his "old" movies (maybe the Sophia Loren one) but really enjoyed his autobiography and the documentary (I missed the'top" part tho). When I saw him promoting his autobiography on Larry King he really downplayed the Tony Perkins affair, it's not like he lost the great love of his life or anything. And Tony stole Fear Strikes Out from him

I love watching him sing Young Love on YouTube.

While I enjoyed the doc about him I LOVED his bio even more because of the depth of detail it was able to provide. I'm sure you won't be surprised knowing my love for Linda Darnell that one of my favorite parts was his recollections of the filming of Island of Desire. A weak film and he seems almost painfully uncomfortable though both he and Linda are ravishing.

While he was never my type there is no denying that he was an incredibly handsome man who aged extremely well. Also based on the book he came across as a decent man willing to admit that he had imperfections like everyone else. It was a shame that he went so unexpectedly but then again he was active and on the go until the end much more preferable than some lingering illness.

Zachary Quinto and J J Abrams are the ones putting together the "Tab and Tony" movie, but it sounds like they had Hunter's and his partner's blessings. Hopefully this will be a good (if sad) love story.

His memoir is a quick bittersweet fascinating portrait. Definitely try and find it.

Gingerguy, Tony has a LOT of admirers, and I think he was an interesting actor, but he was never someone I myself found attractive. It could be because my first exposure to him was "Mahogany!" and then "Psycho." I rarely go in for the very slim ones in any case. Thanks!

loulou, I meant to mention some of his notable female costars (other than Natalie) like Sophia, Dorothy Malone, Rita Hayworth, Debbie Reynolds, etc... but didn't. I will head to youtube today to watch him sing!

Joel, great to see you again. I was just wondering about you as I looked at photos of Tab with Miss Darnell. He was so young and unseasoned at that point! Amazing that he got to share love scenes with Linda. And I fully agree that, though he went shockingly fast, it's preferable to a horrible, lengthy illness.

Forever1267, I will look forward to the movie (even though I'm so often disappointed by Tinseltown reenactments.)

What a great set of photos, showing some of the best of the man who was one of the most gorgeously handsome guys to ever come out of Hollywood. He was my first screen crush, and my appeal for this man has continued to this day. Thanks for this wonderful tribute!

Thank you much, Bill! Glad you enjoyed this. I appreciate you taking time to remark about how much you liked it. I am gearing up to re-watch "Tab Hunter: Confidential" -- probably this time through teary eyes...!

Thanks, Poseidon, a very fine tribute --- actually a paean to a Hollywood God. I saw Mr. Hunter when he spoke after a 2006 screening of "Damn Yankees" in Los Angeles; I don't recall the specific details in his recounting of the film's production, but he was in good humor and established a wonderful rapport with the audience. It was also a pleasure to see that at age 74 he still had his youthful physique; damn, those were some good Yankee genes!

Hi Stefano. Thanks for commenting! How wonderful that you actually got to see and hear him in person. I think he looked quite terrific even in his eighties! But I also think that - apart from a lifetime of physical activity, including extensive horsemanship - one key was that he was finally happy and content. That can do a lot for one's looks. (I wish it could happen to me before I look like one of the statues on Easter Island! Ha ha!)

Great tribute!
Gonna try to track down his early '60s NBC comedy "The Tab Hunter Show", where he played a girl-hungry cartoonist. Don't know how this 10-year-old gay boy missed this on its' original Sunday night run!