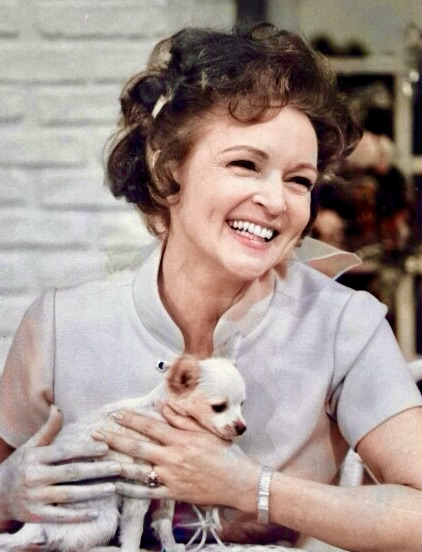 In-between duties at work (or sometimes during!) I've been taking a look at various shows on my screen, often listening more than watching. One that I caught yesterday was an installment of the rarely-seen 1971 information-entertainment series The Pet Set. The one-season show featured animal nut Betty White interviewing a celebrity guest who has brought along a pet of theirs, followed by one or two other features concerning various animals.  The whole ball of wax is now available on DVD for those interested in it. Thus far, I've only seen a couple of eps, which are fun apart from anything else just for the CLOTHING worn by the hostess and her guests.

This is another great find: Betty White, animals-- and crotch!

Whenever I read your blog, I scroll down *slowly* because I've learned you frequently "build" the presentation and I don't want to get the "reveal" too soon.

So when you presented the shot of the guest with his face obscured, I looked at the fluffy mass of hair coupled with poodles and reputations as "sissies"-- and *IMMEDIATELY* thought "RIP TAYLOR!"

But once I got over my surprise at Michael Landon being a "poodle sort of guy," I *knew* we were eventually going below the belt. Somehow, we just can't avoid examining his crotch-- not like he ever tried to avoid drawing attention there!

Anyway, this was a fun find, and thanks for framecapping and posting it! Love to all and be safe and well, everyone!

A delightful find! I remember when "The Pet Set" was on but never saw a single episode. I just wanted to mention that "Bonanza" premiered in 1959, not 1956, and remained on the air for 14 seasons.

I grew up with Golden Retrievers, but I do recall a lot of poodles around in the 70s.

Those elephants certainly were sniffing things out!

Landon, holy cow. Once I was clued into this amazing thing that Landon did on Bonanaza, thanks to you, I was hooked on watching many many episodes to spot the phenomenon, hahah. Trust and believe any unbelievers, it is a proven fact. Time and again, episode after episode. I started as you advised with season 3, when the costumes for the main family became fixed on each character for continuity of filming and stock footage. This was the beginning of the infamous taupe pants. I thought (naively) that the phenomenon would cool down in much later seasons, but oh no, I'm around season 8 now and it's still going strong. There are some consistencies. Landon always, always wore himself on his left side. There seemed to be at least two versions of the taupe pants. One featured the rear as a major distraction, I've never seen pants do what they did. They rode WAY up into his butt crack, creating two singular globes of his ass, with a very deep cleft between. No matter how he moved, the cleft remained. A miracle of tailoring. The other version of the taupe pants were smoother in the butt, but tight in the front. Thus the snaking to the left. This also varies. Sometimes there is clear vpl, sometimes a vague but larger bulge. An excellent example is season 6 episode 10 called "Old Sheba" that aired in 1964, which is available on Youtube. I would be grateful if anyone has any other notable episodes, hahha.

Landon was a bit of a mystery; was he aware of what he was doing? I think he was. He was very into the production side of things even then, and would have seen the "rushes". Alison Arngrim who played Nellie in "Little House on the Prairie" writes in her memoirs that Landon did not like wearing underwear and went out of his way to have shirtless scenes whenever possible ("for the ladies who watched"). There is a particularly hootful episode when the Ingalls pet dog dies in the barn and there's Landon as pa, shirtless with suspenders crying and acting his ass off, beautiful bronzed chest and all. It's a sight to behold. Landon seemed to become even more beautiful as he aged, with that enormous head full of hair, still stunning even toward the end of his tragically short life. I admit he's a hobby of mine and I never tire of watching him whenever he shows up, anywhere he shows up. Thank you!

So cool! I've been a Betty White fan since the 70s as Sue Ann Nivens. Never heard of this show, but I will admit to never really researching her total work. BUT, I did a search through all my streaming services and found it! Tomorrow, the hubster and I are binging the entire season to watch her, her animals (big furry advocates here), and who the other guests are. Thanks for the new show!

I had three Boston Terriers in the 90's.
Now I have two standard poodles. :)

Btw, my poodles are Max and Yves. Any guesses where the names come from? Hehe

All those animals, and the scarf in the her hair couldn't distract me from Michael Landon's pants, and his profile. Gorgeous in any year and you can't say that about anyone. Betty White truly was a joy wasn't she?

hsc, I so appreciate that you enjoy letting the "suspense" build a bit when reading one of my posts (the ones in which you figure something good or odd is about to happen! LOL) Hilarious about Rip Taylor! Glad you enjoyed this.

Hal, I darted in and fixed that error. Sorry. Hectic Friday, trying to get a post up and it was a typo. But I hate putting out incorrect info, so I appreciate you letting me know.

Forever1267, it was hilarious to watch that baby elephant just trounce right over there as if, "Are you my father?" Ha ha!

Ptolemy1, I only speak the truth! Hee hee!! I do apologize for sending you on a months/years long excavation to spot all the trouser snakes that Landon slithered into those (sometimes dull) "Bonanza" eps! I've mentioned it before but I do hate it when you can see his bikini panty-lines through those pants. As you (and many others) have mentioned, he ditched those for good by "Little House!" Thanks!

BloggerJoe, how wonderful that you have a new way to celebrate your affection for Betty. She's always worth watching. She was in semi-serious informational mode here, but still with her winning smile and sense of humor. The guest list is so fascinating! Loved the chance to see her hobnobbing with friends or strangers.

Shawny, you're among friends. You can admit it if it was really the 1920s when you had the Boston's - Bwahhahaa! That's neat that your pet ownership had a similar arc to this.

Gingerguy, that scarf is a hoot and I think she wears one in nearly every show...! She was such a positive person. Loved, loved loved her!! Her books were a delight to read, too!

Betty was one of a kind. I've read her last word was "Allen" which I think is so beautiful. As a nurse who works with seniors all the time, I'm glad she went to be with him before we had to see her wheelchair bound and frail. She went out kicking and smiling. We all love her so much. And the amazing thing about this age we live in is she's immortal. Like all the others, all we have to do is press play, and there they are.

Oh I'm not bored by the Bonanazas at ALL. They're a hoot to watch who shows up as guest stars. My very favorite so far is Marlo Thomas as a CHINESE woman. Landon gets a love interest about every other episode, hahh and of course something happens and he's single again. That show was much goofier than I remember, and it's fun to watch the later episodes when they weren't as set-bound. Thanks.

Ptolemy1, that is sweet about Betty's last word and true that thanks to TV she is immortal. The important thing (to me, anyway) is that she retained her razor-sharp mind up to the end. She was SO witty and fast with a comeback. I'm glad you're enjoying vintage "Bonanza." I definitely recall Marlo in Asian mode. She was THAT girl... LOL