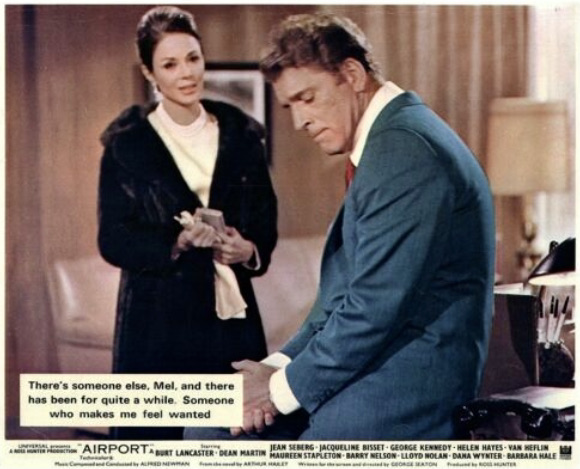 Every so often, we do one of these posts about memorable (to me, at least!) costars and their roles. Anyone who's dipped a toe into The Underworld knows that Airport (1970) is a top ten favorite film of mine. One of its many story threads concerns the unraveling marriage of the airport's general manager, played by Burt Lancaster. As a snowstorm has engulfed the place and one of the airliners is threatened by an unbalanced, bomb-wielding passenger, he must also contend with his demanding wife Dana Wynter.

He had such incredible presence on screen. I think it’s “Seven Days in May”, there’s a bit where he strides toward the camera in that smooth, catlike walk, in a perfectly tailored military uniform. Sigh... He manages to be both graceful and utterly masculine.
“Airport” is one of the movies I had the good luck to see on my hometown’s long gone big screen. What a great show, still love it. It has no pretense of being anything other than a glitzy, glamorous soap opera in the sky. Loaded with cliches, but who cares?

One correction: Jean Seberg's character Tanya was a widow, not a divorcee! She mentions it to Ada Quonsett (Helen Hayes) in one scene. And yes, this movie is a favorite of mine too: I now have the Blu-ray. Why isn't it on TCM?

Dan, I agree with you on all counts. My FAVORITE Burt Lancaster moment is when Deborah Kerr opens the door and he's standing there in the rain in his uniform (in "From Here to Eternity," natch!) That face... And I would have LOVED to have seen "Airport" on a big screen. The split-screen effects are lost on any small TV as is the details in the faces of the actors because so often the figures are small and letterboxed. Larger TVs have helped with this. Thanks!

I ought to have known, as this is a big fave film of mine, that they changed Tanya from a divorcee to a widow for the movie, but I was stuck on the book for some reason:

Mel Bakersfeld is the main character around whom the book revolves. He is General Manager of Lincoln International Airport. His problems in his marriage are further exacerbated by his romantically charged friendship with a lovely divorcee from Trans America Airlines, who is their passenger relations manager, Tanya Livingston.

Tanya Livingston is Mel's love interest. She works for Trans America Airlines, and Mel often visits her. She was deserted by her husband, and has a daughter with him.

I will correct it now.

I thought it was Janice Rule at first and you were going to do a Swimmer/Airport combo. She is fabulous and looks bored in any era, but also rich in any era. Beautiful woman. Burt is really impressive at any age and his rear in those patterned tights at 40 would shame a 25 year old. He's definitely the neatest Pirate I have ever seen in a movie and the costume looks like it just came off the sewing machine. Cravat is a little hottie too (I like em off beat). "Airport" is kind of the champagne of disaster movies with stellar cast and big budget. Love Burt and even forgive the big hair :)

I LOVE The Swimmer, it's just so existentially strange. Lancaster always fascinated me, he had a lithe lanky way of moving and nobody talked like he did. He's amazing in Elmer Gantry, where he pulls out ALL the stops and eats every single bit of the scenery. And you know what? It works. Thanks.

Lancaster could point his gun at me any ole time!

Airport is so much fun, although I have no idea why the Academy gave Helen Hayes that Oscar. Karen Black and Sally Kellerman were robbed!

I love that final scene between Burt and Dana in his office! It really does give her a chance to show she's not the completely clueless, selfish tone deaf bitch that she's been portrayed as up to that point. It's beautifully played by both with a heavy bittersweet air of resignation at the last that whatever they had is gone but that they agree their children are the most important issue now.

Except for the bleak scenes between Maureen Stapleton and Van Heflin (and Maureen's solo scenes) it's the only part of the film with real dramatic heft.

Dramatic heft or not though I adore the entire movie and watch it at least twice yearly, if not more.

I never noticed Dana in The Crimson Pirate....I must have been distracted by something else!!

Gingerguy, Dana bore a resemblance to Barbara Rush (both were very elegant!) and Rush had been offered the part of Cindy Bakersfeld in "Airport" before Dana ended up in it. I miss ladies like them in movies. Burt was so virile for the better part of his career, bounding around all over the place. :-)

Ptolemy1, I agree. One thing I heard about "The Swimmer" that sort of dejected me a bit was that Burt had Janice Rule replace Barbara Loden in her role because he felt Loden outdid him in their scene. Maybe it's not true and there was another reason, but that whole sequence was removed and re-shot! Wild... I can never turn that movie off if I come to it on television.

Forever1267, I do adore Helen Hayes and I love her in "Airport," (I love watching Jean Seberg try to handle her and worship the moments with Helen and Jackie going at it!) but... I always felt that Maureen Stapleton's acting was so much more heartfelt and believable. That category has long been unpredictable, it seems. A real wild card with many head-shaking winners over the decades.

joel65913, totally agree about Dana and Burt's final scene. And, as I said above, Maureen was really heart-tugging in her sequences. I cannot go more than a year without watching "Airport." It's just so... everything! LOL Love the look, the music, the stars, the way the plot-lines converge. I never fail to be hypnotized by Jackie and Helen's exchanges. They just seem like two people you'd never see in a movie together, yet there they are going mano-a-mano. :-D

I don't know if it's that the print the stills were struck from was faded, but Burt looks to be more accurately "The Tangerine Pirate". So pretty. I always had a soft spot for his role in The Rainmaker. His over-the-top portrayal of Bill Starbuck plays like an audition for The Music Man. Another weary-spinster role for Katherine Hepburn, Burt's con-man promises to end her and the town's drought.

It seemed the aloof, cool Barbara Parkins was being groomed to become the Dana Wynter for a new generation, but never quite took off. Dana was ubiquitous on 60's TV, she guest-starred in every and anything. But to lovers of schlock, like myself, she will always be the star of Invasion of the Body Snatchers

rigs-in-gear, there was a point where Burt was wearing a red top (or sash or something) which may have had more to do with the title of the movie, but I preferred him shirtless for this post. Ha! Or if you mean his skin, well, you'd have to consult the (very lucky!) body makeup people for that. I totally agree about velvety Parkins being next up to bat in the Dana Wynter ballgame! I love the stark photography of "Snatchers" in which her coloring really stood out. Thank you!