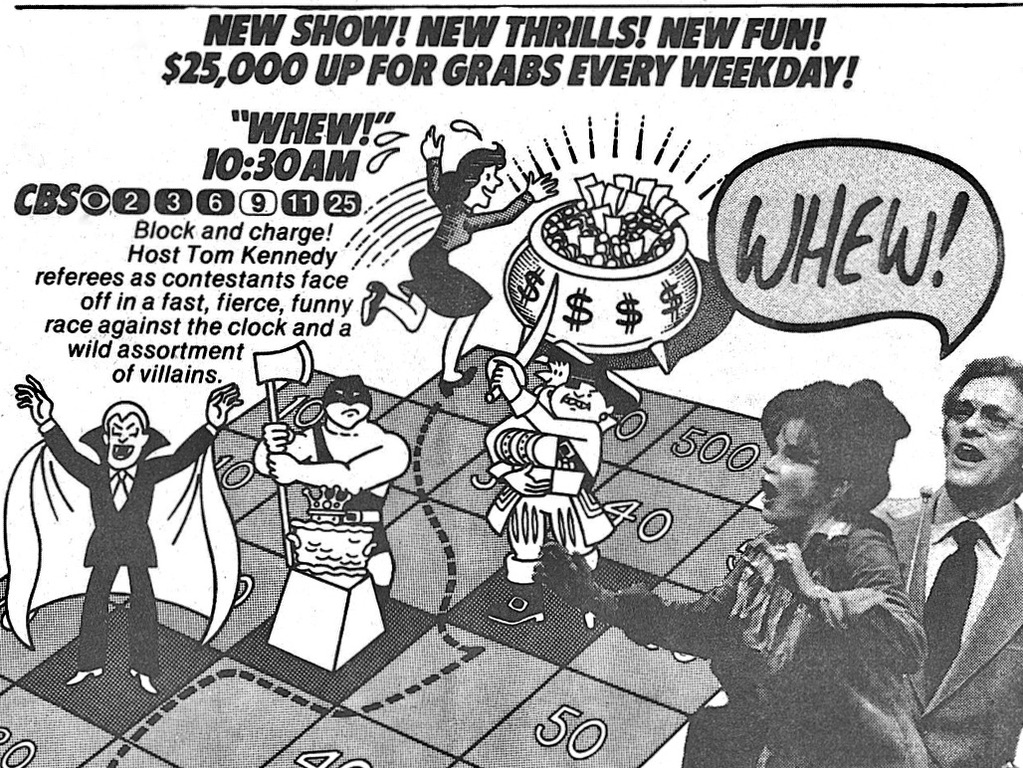 Close to being a hit show, that is... On April 23, 1979, the new game show Whew! premiered on CBS as a lead-in to The Price is Right. It's installation at 10:30 am caused a line-up shuffle that shoved the long-running soap Love of Life to 4:00 pm, signaling its demise months afterward. Ads for the show suggested a maze-like gauntlet of various villains with a pot of gold at the end. The reality wasn't quite that action-filled, but it was every bit as corny. Today's photo essay will take a look at this show, but is chiefly focused on the version that came about in November of that year. 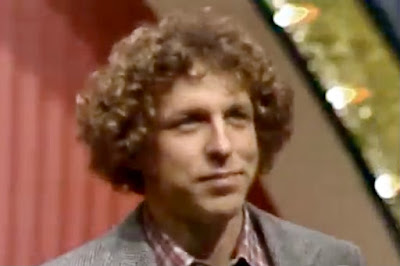 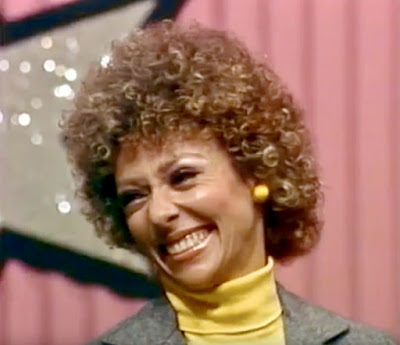 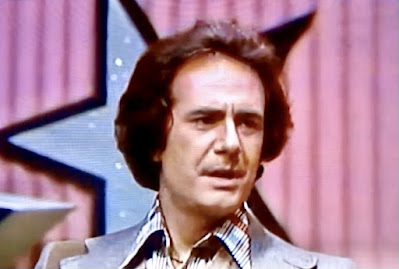 I always found Patrick Wayne to be much more than cute 🔥

What a tacky game show. I love it! I have to see it now. I used to watch Kids are People Too haha.

My hub and I have been watching Password from the early 1960s. Started in 1962 to be exact. And there's an early year episode with BW. At one point the other guest celeb cracks a joke about Alan and Betty hinting they are an item, and you can see their giddy very happy reactions. Then some months later BW is on again, and it's mentioned they are going to be married. It's very cute. We are currently watching as of 6/14/63 or so which is right before the Kennedy assassination. So I'm wondering if there's any tone shift or visible change in people. Probably not. But I only have a few episodes to go.

Fun stuff. I still lay down to button my pants by the way and got a big kick out of the double shirt look, that always was a mystery to me. I watched game shows with my friends mother (while other boys were playing sports of course) and she stuck to the same ones so this one doesn't ring a bell. I am probably repeating myself but "Soap " was a huge issue in my house. It was condemned by the Catholic Church, the best way to make it must see tv, and for some reason my very liberal Catholic Mother took a stand on it. My sisters and I adored it and just wouldn't stand for the hypocrisy and we drowned her out on it. Never missed an episode. So fun to see all the Soap people here, I forgot about Sal Viscuso. And looking back now Robert Manden is super hot, yes Daddy, Thanks for this, I never thought I would ever see Carol Wayne as a brunette, wow.

Thanks for the history on this. I've seen a few episodes without the celebrities, and was not impressed. I don't remember this at all from childhood.

I must be thinking of someone else, because Michael Young looks familiar, but his IMDB isn't telling me what I remember him from.

Patrick Wayne was a looker. You and I both like strong chins.

I caught an episode a few months back that featured a very familiar looking contestant. Turned out to be Julie Brown, later of "Medusa - Dare to be Truthful" and "The Homecoming Queen's Got a Gun" fame. She won some $, as I recall.

Hey Poseidon,
Rita Moreno looked older back then than she does now... hmmm!
Cheers, Rick

Interesting how so many gimmicky game shows came and went so quickly (like some dates I recall), but a handful of basic concepts lasted, my favorite being Pyramid - “Things that spew!”

Patrick Wayne is indeed a looker. In the few things I’ve seen him in, he also seems to be a pretty nice guy.

My first take was that this certainly was the year of muddy colors. Just about everything they’re wearing looks like it’s been through the wash a few too many times.

Changing topics - just booked a cruise that will put us at sea on NEW YEARS EVE! Anyone know where I can get one of those pastel tuxedo shirts with the frills down the front and on the cuffs? Preferably with contrast stitching and a built in flotation device.

What a great post to come out of such a weird show.

I always had the hots for Patrick Wayne. I had no idea he was John Wayne's son. And he's 83 years old now! And looking like Fred Willard!

I recognized Elaine Joyce right away. I don't think I ever saw her on anything but game shows.

I would never have recognized Carole Wayne. Interesting how unremarkable she is in the Farrah Fawcette getup.

I had no idea Roxie Roker was Lenny Kravitz's mother (or Zoë Kravitz's grandmother).

Thanks again Poseidon for the great write-up.

I remember watching this show as a kid. Although the biggest thing I remember about it was an unusual edit at the end of one episode where the contestant won and was jumping up and down with such force that he injured himself.

Lots of response to this post. I'm a bit surprised to be honest!

Shawny, I need to hunt up some KAPT and see what I might have been missing. I LOVE the vintage eps of "Password." Many great stars appeared in the b&w era, but you just can't beat the color ones for sheer 1960s eye-popping patterns, colors and styles. And, yes, Allen and Betty were charming on them all.

Gingerguy, in 1984, I was an Oxford over a Polo with the collar up until my mother started doing a Joan/Faye routine over me sending both down the laundry chute after one wearing. LOL These days I wear as little clothing as I can get by with because I'm always hot, even in the wintertime (actually it's worse because artificial heat gets to me in the office.)

Forver1267, people probably tuned out of the original "Whew!" and then the celebs weren't enough to draw them back. I never saw "Night Shift!" Maybe someday. I was never inclined to watch Shelley Long in anything (or Michael Keaton, for that matter), but maybe sometime I'll give it a look now. Thanks!

IndyAdam, wow!!! That's startling to know that Julie Brown was a "Whew!" contestant. I guess she must have been on the young side compared to some of the other ones. I'm curious now if she was demure or wacky or what.

Rick, Rita has aged rather well, with out without some help. LOL I was not big on that 'fro she was sporting the second time. Somehow it was just a bit much. But "big" hair of one sort or another was about to be a hallmark of the '80s.

Ptolemy1, it seemed like Pat never got too many decent movie opportunities except for some adventure flicks. But I always looked forward to seeing him in practically anything. Like I say, he got the BEST of his parents' genes. I like "Shenandoah" at lot, too, and he and Katharine Ross were so cute. Thanks.

Dan, LOL about the murky, dull-looking clothes. All those (usually) too-loose camel-colored polyester slacks...! Dreary phase for clothing it seems. I have a general aversion to pastels and I wonder if it took hold during my childhood when "dusty rose," "peaches and cream," "mauve" and "pale salmon" were so popular.

A, I'm so happy you got a kick out of this. I was just desperately trying to get something up before a weekend of camping! Elaine Joyce seemed to do a lot of "Love Boat/Fantasy Island" type shows, too. I used to see her on "Match Game" a lot back in the day. I'm glad I could surprise you with some family connections.

Mrmervis68, I don't think I ever saw that...! But... You made me think of an uproariously funny moment on "Name That Tune" when a woman slammed her hand on the buzzer and exclaimed "Please Help Me I'm Falling" as the answer, then proceeded to waddle backwards and keel over!!!!! So crazy. Thanks!!

P, I wouldn't recommend KAPT really. It was purely for kids. And btw, I know you know how much I love your blog. But thank you for continuing to post, I always enjoy everything you post.

Shawny, I couldn't resist looking into a few snippets from it, at least. It was "lite" but I still enjoyed seeing more of Michael and some of the musical acts who popped up on the show.

Everyone who is agog over Patrick Wayne... I forgot about it myself somehow, but I did a tribute to him back in 2018 with many photos and plenty of info if you're interested in more of him! --->
https://neptsdepths.blogspot.com/2018/03/happy-patricks-day.html