A Sprinkle a Day: "Tall Story" 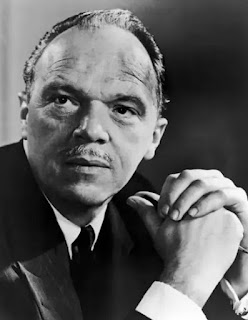 Full disclosure is that this post is nothing more than a little appetizer to have something up while I continue to work on my next offering, which is taking much longer than anticipated (because I am clinically insane and can never leave well enough alone when looking into things...!) After one post recently about Ensign Pulver, it got some of us talking about director Josh Logan (seen above right) and his proclivity for showcasing beefcake in many of his stage and screen projects. From there, I was interested in looking back at one example that, while very brief, is still a favorite of mine. It occurs in the movie Tall Story (1960), all about the eligibility and romantic exploits of a star college basketball player. 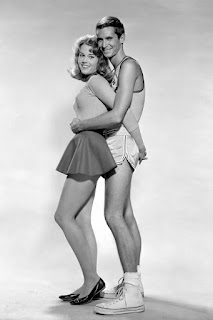 Adapted from an only semi-successful Broadway play of the same name (108 performances), it was the film debut of one Miss Jane Fonda (who was nervous, unsure in the part, bulimic and resistant to the cosmetic enhancements applied to her by the Warner Brothers stylists.) Warren Beatty was considered for her costar, but there was worry over casting two unknowns together, so it fell to the more established Anthony Perkins to essay the part of the star basketball player. Fonda was his adoring cheerleader girlfriend. 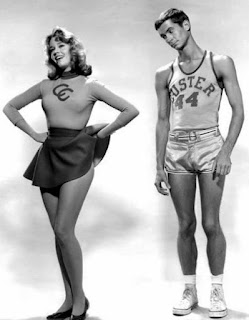 Gay in real life and in an on-again/off-again relationship with Tab Hunter, Perkins not only had to learn to effectively play basketball, but also learn how to take an interest in the physical attributes of his female costar! Granted, later in his life a conflicted Perkins married and fathered children, but at this stage those happenings were years away. 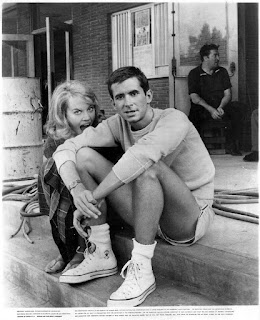 Fonda fell hard for her lean and lanky leading man and later remarked that both she and Josh Logan were in love with Perkins at the same time...! But I digress. We're here to talk about my favorite 15 seconds of the film.

In his customary style, Logan wanted to include a little male hunkitude and included a moment in which Fonda absentmindedly follows Perkins into the men's locker room to return his jacket, where she dreamily gazes at him, barely able to put sentences together. Suddenly, it occurs to Perkins that his gal-pal is standing in a place where a naked man is apt to appear at any moment! 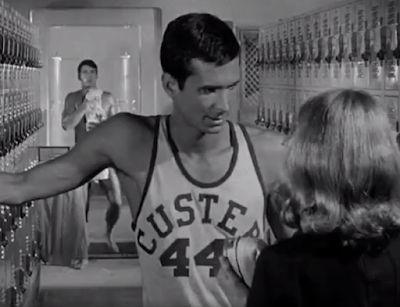 Oh my goodness he is gorgeous. That film has been on TCM and I only focused on it one day because of young Jane, I quickly unfocused when I realized it was a) about sports and b) was black and white and looked like it should have been in color- to my eye. Tony Perkins is super cute and has really nice legs! but Van is just dreamy, he had the kind of perfect physique that is just right even though I usually like 'em when they are too much.

Recently re-watched The Celluloid Closet on TCM - the first time since I viewed it at a LGBT film festival long ago - and relished one individual’s comment about how we LGBT folks were starving for “the crumbs” in films: those scenes in which there was a hint of same-sex attraction or a subtle - oftentimes not-so-subtle - flash of skin to draw in members of both sexes. This Van Williams moment may have very well been such a “crumb” for me, had I seen this movie back in the day. The guy had it all going on. I’m glad to hear that he escaped those who would have exploited him and hope his was a full life. Another wonderful post, Poseidon. Looking forward to more discoveries in your investigation of beefcake in Josh Logan films!

I LOVE early, fizzy Jane Fonda!! I love her after this period passed as well but after Klute much of the effervescence of her youth vanished.

Tall Story isn't one that I've seen often enough to have a firm memory of it, I prefer Cat Ballou, Barefoot in the Park and Any Wednesday. Jane herself has said that the last is her least favorite of all her films but I find it adorable (though I'll admit it's genre politics are very dated) and it has a delightful turn by Rosemary Murphy. However Jane has a day dedicated to her this month on TCM's Summer Under the Stars and it's kicking off with Tall Story so I'll have to DVR the movie and refresh my memory. As it stands now I remember Jane being cute but uncertain, I don't know what happened in between this and her next film "A Walk on the Wild Side" but she's much more relaxed and engaging as the spunky strumpet Kitty Twist than I recall her being in this. Perhaps it was first time nerves.

Another reason to catch the movie is because, hard as it is to believe, I have zero recall of Van Williams and his wandering towel! You'd think something like that would linger, but it has been a long time. He's was a beaut! Thanks for jogging my memory with another terrific post!

A veritable smorgasbord of all meat, and no potatoes. Thank you, Poseidon!! Today’s repast of odd poses, strange taglines, and wanton grimaces are a sight to behold.

My faves so far: The second-tier tagline from the poster for, The Yin & Yang of Mr. Go....”She was the first oriental who wasn’t inscrutable!" Wow, that's gotta be one of the best indelicate double entendres ever to grace a movie poster!

Also, your comment about Surfside 6’s, b&w publicity-shot, where you’d pithily noted that Lee Paterson looks like ‘he’s taking a leak in the corner’ –

Because, if you enlarge that pic, you can clearly see the cruisy look on Lee’s face – and coupled with the position of his left hand, gives the viewer (at least this viewer) the impression that he may have been doing something a touch more risqué in that corner. Though, it is good to see classy Diane McBain knowingly keep her eyes above the fray!

Additionally, the great pics you’ve posted of the always gangly/cute Anthony Perkins really brightened my day. So, thanks again, Poseidon!

Another great post! Love the pic of Perkins looking down at la Fonda’s butt - - is that Tony jr. hanging to the right?! Looks like he had quite the set what with the ball bulge as well! Always loved his dark hair and eyes; to this day I prefer dark eyes…but I would NOT kick ol Van Williams out of bed for eating crackers!!! He had a really fine physique that looks timeless as far as muscle proportion goes. Oh, and that hairy chest doesn’t hurt! I have never seen pics of him outside of Green Horny, er, Hornet.
So, thanks again Mr. P!

Gingerguy, you have to stick things out... LOL ...so to speak. Or use the FF button to see if anything good comes along. There is a lot of male physique to admire in this movie as it was done when basketball uniforms were scanty and a bit snug instead of the pantaloons that later took over. Glad you enjoyed the shots here, though.

SonofaBuck, YES, I am from those days when things weren't just available for the taking and you hoped you'd get to see a quick hint or glimpse of something you liked. One reason I sat glued to "CHiPs" as a kid with my eyes on Erik Estrada's uniform. LOLOL "The Celluloid Closet" was something of a landmark film and acted as a guide for me to seek out certain movies afterward. Thanks!

joel65913, the scene is SO BRIEF as to be unreal that he wound up with an 8x10 promo pic! I am still dying to know more about the moment that was apparently cut which is in that other lobby card. I started looking for "Walk on the Wild Side" after seeing the aforementioned "Celluloid Closet" and instantly loved it (even though I LOATHE Laurence Harvey.) Thank you.

Dean! Ha ha! Love it about Lee and his cruisy attitude. Tony Perkins has never been someone I found attractive, but this period in his career comes closest to getting there for me. He's nerdily charming in the pics. This same year came "Psycho," which forever altered his career trajectory/perception. I wonder how he'd have endured or proceeded without that particular movie on his resume. Basically a legendary performance.