Poseidon Quickies: Prepare to Get "Pulver"-ized! 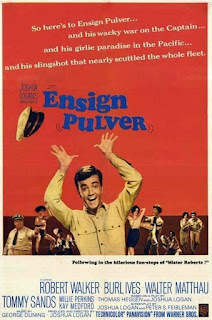 Oh, sure... I had heard of the 1964 movie Ensign Pulver, a sequel to the monster hit Mister Roberts (1955), with different actors and mostly different characters, to boot.  However, it's sort of obscure and I never sought it out (I haven't even seen Mister Roberts if you want the whole truth!) I also got it a bit mixed up with things like The Wackiest Ship in the Army (1960) or All Hands on Deck (1961) and many other hijinks-laden flicks set on military sea vessels. But recently, a P.U. reader mentioned the movie to me and I felt the need to look it up. There was a nice little tidal wave of South Pacific (1958) style sailor beefcake to be found! And on top of that, there were enough familiar faces in it to fill out the famed puzzle board on Hollywood Squares.

This is one of those films I spotted when it used to run on AMC-- back when they actually showed vintage American films, "classic" or not.

The whole film is mind-bogglingly homoerotic, especially the big "Roll Me Over in the Clover" ("...give me a beer, and do it again"-!!!) celebratory setpiece.

There's a moment of extreme camp when one muscle-y, scantily-clad guy leaps into another's arms and kicks his leg high like a showgirl.

This, of course, follows similar "I can't believe I just saw that" moments in Josh Logan's SOUTH PACIFIC, like the "LOOK BUT DON'T TOUCH" sign on the men's outdoor shower.

It's astonishing what Logan got away with in his movies, but I guess that like John Wayne's THE SANDS OF IWO JIMA, having a bunch of manly men doing manly things away from women gave you cover. (Or uncover, as the case may be.)


Thanks for reviewing this-- you never fail to surprise me even when I'm familiar with a film, and I never realized until today that the guy getting his bare butt revealed (how'd they get that joke past the Code?) was soon to be Goober Pyle!

The pheromones in those pictures alone...

Forgot about this one. Thanks for reminding me.

This is on YouTube (for the time being, anyway) in a pretty decent widescreen print.

Let me correct myself, though, after just watching the "Roll Me Over in the Clover" scene again for the first time in about 30 years:

While one guy does jump into another's arms, he doesn't camp it up as much as I remembered it, and there's no showgirl leg kick. His legs do both fly up as he lands in the other guy's arms, though-- and I think this is framecapped above.

So it's slightly less blatant than I remember, but boy, you still have to wonder if anybody picked up on these scenes back in the day.

OTOH, prior to increased gay visibility-- and the realization that not all gay men were easily spotted queens-- I guess a lot more that raises eyebrows now just flew under the radar, and got dismissed as "boys will be boys" male-bonding among manly men.

I know I've seen this but it was years and years and years ago and I am obviously due for a rewatch since I remember none of this ample display! I think I watched then because I was curious to see how Robert Walker Jr. stacked up against his Poppa, not great as I recall, it was like watching the elder (the resemblance is positively eerie) with half of his charisma squeezed out!

I don't even remember Goober's ass and you would think that would be something that would stick since it's so unexpected!

A wonderfully intriguing catch Poseidon for it's sheer obscure uniqueness. Thanks for the day brightener!!!

Never saw this movie, but I remember Walker Jr. from an episode of Star Trek. Always found him a bit creepy; don’t know why…
Lots of cute guys in this movie: Larry Hagman was so cute on Jeannie; I always found Dick (!) Gautier attractive. Definitely lots of man candy is this film…
I was in the Navy for five years, and let me tell you-when there are no women around some straight guys will fool around with other guys! Had a few hot ones back in the day! And I knew their wives / girlfriends. Those were the days.

This is hilarious! starting with" taking on loads (of cargo)" and that pocket ripping! exactly what kind of rump injury did Burl Ives have anyway? I think I have only seen "Operation Petticoat" and "Father Goose" since this isn't my favorite genre, but the guys are hot salty seaman in these kinds of movies are good fashion inspiration for the Summer

"exactly what kind of rump injury did Burl Ives have anyway?"

Pulver reads one of Matthau's medical books and determines that the buttocks-- which he pronounces "byoo-tox"-- are an extremely sensitive area, with lots of nerve endings on the cheeks.

So he takes a wad of lead foil and carpet tacks (which he shows Matthau in closeup) and uses his slingshot to shoot Ives in the "byoo-tox" with this nasty-looking spiky projectile and incapacitate him.

I've been hideously remiss in responding to your comments, everyone. Hasn't been a great time in The Underworld as of late.

hsc, did you ever see my post here about "The Sands of Iwo Jima?" I felt like I was the only one who picked up on some of its aspects. And you probably know, Josh Logan mounted a splashy Broadway show called "Wish You Were Here" that had a fully functioning swimming pool in the set, with handsome hunks cavorting around...! He also did the musical "By Jupiter" with all sorts of men in skimpy togas, etc... You got to where you could almost count on some beefcake.

joel, I was so startled that George Lindsey of all people had his butt cheek out for perusal! Ha ha! But the scene is quick, so you almost had to know it was him in advance of it happening without rewind/freeze frame.

Polly Esther, that "Star Trek" ep was one of the first TV memories I have (in reruns, of course.) He CREEPED ME OUT so much in it! And he'd do all these mean things with his mind like remove the features from a girl's face, etc...! BTW, if you believe Skip E. Lowe, and were talking about cretinous, unappealing Skip E. Lowe, he claimed in his autobio that he never once met a marine who wasn't up for some mano a mano activity! So I believe you.

Gingerguy, I'm glad you liked my little remark about taking on loads...! Ha ha ha! I find many of these sorts of films tiresome, too, and usually painfully unfunny, but if I have to watch one, I like to see some sailor skin. ;-)

hsc, thanks for providing the answer to the burning question about Burl's bum.

Hi Poseidon,
Here I am chiming in a bit late as usual. I wanted to thank you for reviewing this movie which I saw many years ago and almost forgot about. HSC above has already noted the similarities with the Seabees scenes in "South Pacific." How did Joshua Logan ever get away with this!! Didn't anyone else involved with the production admonish him that virtually every scene in the film was designed to send temperatures rising in certain bars in the Village! I half expected to see Stewpot capering on the ship with Jack Nicholson! And the natives! [wipes forehead, whew...]. Still I liked the movie, and remember as a kid being moved by the subplot about the little girl. Thanks again for a great post and reminding me of this very early porn film! Huston

Hi, Huston. Thanks for chiming in - even a skosh late! ;-) Josh Logan was something else. I mean, you know he just LOVED putting Stewpot in those little red briefs and whatever else he was trotting around in. Watching Van Williams last evening in an episode of "Cheyenne" - Yes, Van and Clint Walker TOGETHER!! - it occurred to me that he got his start with Logan, too. As what? A naked athlete who is caught in the locker room and has to quickly grab a towel when he sees that Jane Fonda is in there!! (The movie is "Tall Story.") Thank goodness for JL in any case because we all now get to reap the benefits of his keen eye. LOL