Poseidon. That's the cat this site was named after, right? Ha ha! So it's only natural that I frequently turn the focus onto things associated with The Poseidon Adventure (1972), no item of trivia being too small. In all honesty, there are many other webmasters who have made it their life's work to pay tribute to the movie where I like to dabble in other areas, too. If I seem obsessed, trust me, I'm a lightweight compared to some fellow fans. There is probably nothing those gents don't already know. Yet, when I come upon something I wasn't aware of before, I like to share it just the same. Today we're going to make an unexpected link between the bridge of S.S. Poseidon to the bridge of the Jenny, a ramshackle tugboat featured in the delightfully heinous sequel Beyond the Poseidon Adventure (1979), by way of the Golden Gate Bridge. On we go...


You'll recall I mentioned that the connection between the bridges of the two seagoing vessels would be made via the Golden Gate Bridge. That landmark hails from San Francisco. Thus we turn our attention now to a 1975 episode of The Streets of San Francisco. The time is nearly smack dab in the middle of the two aforementioned Poseidon films. 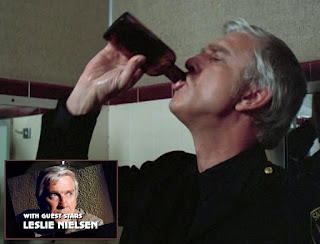 In case you may be wondering, Leslie Nielsen also served time on The Streets of San Francisco. In fact, he guest-starred three different times between 1973 and 1974. He was a highly-prolific television face, with a stretch of feature films in the mid-1950s. After that, he worked on countless TV-movies and shows with occasional movies along the way. He was most often cast is serious fare until the unexpected smash Airplane! (1980) transformed him into a wacky, comic leading man. Nielsen passed away in 2010 of pneumonia at age 84, having continued working up until the year before.

Now this post is perhaps a bit drier and duller than some others, especially if you barely give two shits about the subject, so I thought maybe I ought to perk it up just a skosh at the tail end. Not too long ago, I recorded a 1971 thriller called The Brotherhood of Satan, just because I love movies of that period and wanted to see Strother Martin and L.Q. Jones try to steal their scenes. Imagine my surprise at the leading man of the piece!

Well, that was an interesting essay in free association. “Poseidon” is one of the movies I had the good luck to see in my hometown’s long gone movie palace, on what was said to be the largest screen in Pennsylvania.

Like, OMG, a CHIPS interjection! It’s on right now and they’re doing one of those cliche first date sequences with Ponce and his girl friend gazing into other’s eyes and laughing on a carousel, horseback riding, strolling on the beach, while a soulful love song plays in the background! Look, a sunset! Beautiful, just beautiful...

Where were we? Oh, yeah, in another free association ship disaster film segue, as I know you know, “The Last Voyage” is infamous for systematically destroying the beloved Ile de France with it’s mostly intact interiors. My husband sailed on her as a toddler. We were watching the first few scenes in the dining room and he suddenly said, “I remember sitting right there!”. We always stop watching before the mayhem starts, too heartbreaking.

Fake Jan. I never knew of it, but it’s hilarious. I love this grab bag post. It made me laugh. And I was thinking from reading in the beginning, I wouldn’t mind a top heavy ship...

I suppose with the proliferation of cop shows at the time and the fact that the two were journeyman actors it was an inevitability they would end up sharing an episode on one of them but I enjoyed your pulling everything together.

Geez Beyond the Poseidon Adventure is such a piece of garbage. Poor Sally! She fired her agent directly afterwards and has pointed to it as her least favorite and worst picture she appeared in. Having seen most of her films I have to agree, and I'm one of those people who think Forrest Gump is one of the biggest piles ever foisted on the public!

I really wasn't prepared for Geri Reischl showing up at the end. Hilarious. Sadoff was loathsome in PA but really good now that I think of it. I took bridge literally and thought they reused a set from one film into the sequel. Your brand is all things Poseidon, and I can never get enough of this flick. Such an indelible movie experience in 1972 and fun to see here

I agree with you on Forest Gump. Absolute bull crap only self-important straight men can pinch off.

Hi Dan! I am jealous that you saw TPA in its initial run on a big screen. Must have been quite an experience. Yes, I do tend to be quite random around here. LOL I prefer to cloak it as "unpredictable," but perhaps I am not even that. I really like "The Last Voyage" and its surprisingly gritty approach for a film of that time. Nail-biting! I always mean to feature it here, but never have.

Ha ha! Shawny! Maybe on a Rosie O'Donnell cruise? I thought everyone of a certain age knew of "Fake Jan" but you may be too young. It was startling, jarring and almost blasphemous to me when it happened!!

Thanks, Joel. It wasn't exact Nobel-Prize level research, but it just struck me as interesting to have the three people there in that office who had all been on board the title boat! "Beyond" is just plain INEPT, but I always love watching the steamily beautiful Veronica Hamel and the regally elegant Shirley Knight. So I have to be grateful to it on that score (and virtually that score alone!)

Gingerguy, I have occasionally done posts on re-used sets (The "Bewitched" one, for example), so you can surely be understood for thinking in that direction. I probably misled with my title anyway, but - man - the creative juices have been draining off lately. Just way, way, WAY overworked and overstressed. Always. But I am plugging along the best I can. Someday I hope to return to boredom. LOL

Shawny (and Joel), I recall when "Forrest Gump" came out, my father was at the head of the family dinner table for some holiday and exclaimed that it was the best movie he had ever seen. I didn't hate it, but it really did little for me (I was already averse to Tom Hanks because I wasn't really very fond of his acclaimed performance in "Philadelphia" nor of his pompous, self-important posturing at so many industry events.) Anyway... I haven't spoken to my father since 2004 so there may be some correlation there! Yikes!

It's amusing that, in that final pic of the Bunch, with the awful prom wear the family is wearing (enormous clown ties on the guys, floor-length shapeless gowns on the gals) that Alice in her housekeeper kit looks the most stylish!

Even more amusing, that Mr Brady really wants to face the other direction.

I came across the Brady Bunch variety show late one night and was amazed. It an appalling spectacle and I was absolutely riveted, I could not turn away, it was like a car wreck.

The ironic thing is that “fake Jan” was the only one in the cast aside from Florence Henderson who could actually sing and dance. I guess it makes sense, she was the only one who had to audition.

Hey Poseidon! Jonathan Harris from LOST IN SPACE was offered the Linarcos part as well! Wouldn't THAT have been interesting?

Mike, I can only imagine the scenery-chewing that would have gone on! LOL Leslie Nielsen is retroactively campy in some of his old straight parts thanks to his later career as a parodist, but Jonathan would likely have been campy from the get go! Irwin seemed to be really loyal to many of the actors in his projects (and vice versa!)