Fond Farewell: "We love you Conrad, oh yes we do!" 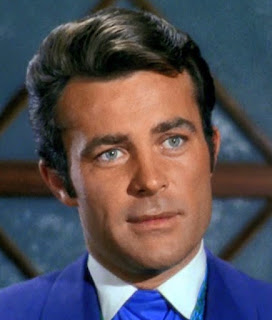 The entertainment world has recently suffered a triple-play when it comes to celebrity deaths. There was the remarkably long-lived cinema icon Kirk Douglas, who passed away February 5th at age one-hundred-three! Then there was hilarious Orson Bean, a remarkable man who was still acting until recently and living an active life at ninety-one before he was struck down on February 7th in a freak two-part traffic accident. Now, February 8th, we had to say goodbye to one of our favorite hunks from television, the golden beauty Robert Conrad. He died of heart failure at age eighty-four. Today, we pay tribute to Mr. C. in photos, for he was not only photogenic, but in his heyday was frequently photographed, leaving scads of evidence to peruse. A figure of awe to me as a child, he became a figure of desire to me as an adult (with apologies if that sounds creepy or stalker-ish! It's not. I'm just sayin' how it was.) He was the recipient of a tribute here in the early days of Poseidon's Underworld, but we want to mark his passing with some more. I also tried not to reuse (m)any of the same pictures this time.

Too bad he’s in black shorts there...

I loved WWW and all those espionage shows - Man From Uncle, Mission: Impossible, Johnny Quest. My fantasy then was to be one of the evil geniuses living in a secret volcano lair. Later, my fantasies changed a bit...

Must say I especially like that pic with Don Stroud. In fact, I'm more drawn to the older, somewhat beefier Conrad altogether.

He certainly was a great beauty in a very manly way and had that chiseled tough guy persona down to a science. He was perfect for Wild, Wild West which was surely tooled especially to his strengths and he was fortunate to have such a deft interplay with Ross Martin.

I remember those commercials! Even at the time they were a hoot but obviously they were successful for the product, he did them for years. And I was also a dutiful watcher of the Battle of the Network Stars and it's endearing way of having the male stars in tiny speedos! Those were the days.

My only problem with him was that often he exuded such a blatant case of toxic masculinity that it was almost repelling. But without some of that brash aggression he probably wouldn't have gotten as far as he did, the world is full of great looking men but few have careers as durable as his.

I was saddened by Kirk's passing but I mean come on he was 103 and beloved with an incredible legacy, so it was hardly shocking.

But I was deeply shocked by Orson Bean's tragic end. So, so very sad. It sounds like up to that point he had a good and enjoyable life so that's something but to go that way is just hideously awful.

Poseidon, as soon as I saw the news of Robert Conrad's passing, I immediately thought of you!

Great write up and pix, natch.

I remember my Mom loving Wild, Wild, West, but rarely saw it myself. Seeing all the pix from the show and watching a few episodes over the weekend, all I can think of is how did Bob's outfits get past the censors?! Wowsa!

Also, I vaguely remembered the Columbo episode which Bob played a macho gym owner. Watched that again, too. Bob looked awesome, if a bit beefier. While the polyester was skin tight, seeing short Bob in elephant bell bottoms and leisure suits made him seem even tinier, like a kid playing dress up in Mr. Brady's wardrobe!

I have to say by the time I was a teen and he was doing those battery commercials and "Black Sheep," I found him a bit obnoxious. Didn't Martin Sheen once spoof his battery ads on early SNL?

Here's a bit of trivia: In the late '70s, Robert Conrad was hoping to film a TV movie or mini-series on the life of famed movie producer Mike Todd. Obviously, he was far better looking than the real Todd, but he had the right personality. Get this... he wanted Elizabeth Taylor as her co-star as herself. I remember finding that uproarious, as if she'd re-enact one of the most traumatic events of her life for a TV show. Also problematic was that ET was a very overweight Republican wife. Conrad's response was that she could lose weight, and he'd even help her... yeah, I'd love to have seen that! She woulda knocked that battery off his shoulder! Pow!!!

Anyway, I'll have to look at your previous tribute to this handsome devil with so much chutzpah!

Yes, Shawny. LOL I guess I could have photoshopped them out, but then who had a butt like that!?

Dan, I also like the slightly older, brawnier Conrad (and I adore Don Stroud.) I cannot locate that movie, which probably has them dressed completely except for that one moment in the lobby card. LOL

Joel, I almost used the term "toxic masculinity" at one point here, but ended up not. He was very driven and aggressive about things. He and Gabe Kaplan got into it one time on BOTNS and he was going to beat Kaplan down in a race (and Conrad could RUN), but Kaplan won!!! He may have had a Napoleon complex. Seemed to want to overcompensate in certain areas. I am very disturbed by the way Orson Bean was killed. I still don't know all the details, but I hate that he was felled in an accident at 91!! (Though ANYTHING beats languishing in a bed for years like so many people do.)

Rick, Conrad was 5'8" which is short for a leading man, but when I was watching "Columbo" for this, he and Peter Falk were about the same height! So he seemed less diminutive. Turns out Falk was only 5'6" which I didn't know...! And it's true that he did get to be a tad obnoxious. I did read, though, that he laughed at the parody of his battery commercials. That is QUITE a tale - and a hilarious one - about his desire to play Mike Todd and use ET as herself....!!! At that point she'd have been more believable as The Lucky Liz than her younger self, who was at her physical peak while with Todd! Thanks!

Bye Bye Bobby indeed, what a dreamboat he was. Thanks for explaining the first marriage, I was reading his obit yesterday and the numbers didn't add up.
he must have been really ambitious besides good looking, or had a great Agent to get his own series his first year.
He was always good looking but for me hit his prime in Baa Baa Black Sheep and the jumpsuit is hilarious, I bet he kept the young guys on their toes.
The teenage wife is a weird story, like something from "A Face In The Crowd" The car accident was super sad. He was also on my radar in those "Battle" shows. The photos you chose are so gorgeous I looked up the old tribute, and hilarious title by the way.

Gingerguy, thanks for acknowledging my "Bye Bye Birdie" title reference! Conrad's early life was something... His father was 16 and his mother 15 when he was born! Times were quite different then, no question. He left home (and school) at 15 to find his way (emphasis on HIS way!) Marriage soon followed and he was happy to become a father because he felt that it guarded him against his parents trying to annul his own young marriage. Apparently, even though he divorced his wife of a quarter-century to marry Miss Teenage America, it was an amicable split. (Presumably, they were already apart in terms of romantic partnership.) Even with all the women and kids, there is something a little questionable about him taking up with Nick Adams and - as you say - winning a show of his own in a hot minute, but then he was undeniably appealing no matter the case. Heigh ho!

I caught some of the WWW's on one of the retro channels, it still held up IMO. My little boy crush definitely crashed when I grew up and saw him on talk shows tho.

...and in the words of Warren Zevon I'd like to meet his tailor, those tight suits were the best.

Murph the Surf is the closest Conrad ever came to a nude love scene. It's very demur, but he is naked, though shot from the side. He also sports one of those short-short kimonos that were fashionable back then. Then there's the famous fight scene in WWW where Connie's pants are split and he finishes the fight with his tighty-whities on view.

Poseidon, You might check out a French blog called "L'homme est un concept" (NSFW) which posted a lengthy analysis of TWWW. Apparently the show was a big hit in France. My French isn't all that great, but the thrust (so to speak) of the article was that TWWW was actually the first gay tv show, in part because the producer was gay himself and inserted quite a lot of double intendres and other hints in order to make the shows more, um, interesting. Maybe that's how Conrad got started on wearing all those revealing outfits!
Anyway, thanks for the great pics and I will read your previous tribute as well. And, yes I did get your "Bye Bye Bobby" reference!
Huston

loulou, I get it. I sort of avoid his later day personage and just revel in his prime-of-life glory.

rigs-in-gear, I managed to locate a (shoddy) version of "Murph the Surf" and watched most of it. He and Don barely bothered to get dressed for most of it! And I did see that side shot you mention. I don't know why they couldn't be just a little more revealing with it all. Why bother with side flank? LOL He was clearly in amazing shape. I have pics of that revealing WWW ep on this site somewhere. Thanks!

Huston, I will try to look at that site. Thanks! I didn't know about the gay producer. Will have to check that out. Most of the villains on the show loved to toy with Conrad and almost drool over him as they did so. (And the villains were very gay/campy much of the time, too!)