Oh, What a Character! Part One: Frank's the Thring

Thanks to an ungodly busy schedule these days (I rehearse five nights a week for an upcoming play in addition to my job now!) and continued issues with the computer I use to blog, I'm probably going to lean more towards some shorter posts for a while rather than the more exhaustive ones I've been doing. In that respect, I'm kicking off today what I hope will be a series. Little tributes to character actors and actresses who don't always get their time in the spotlight. So, off we go with the first one!

Once seen in action, it's tough to forget the imposing, outrageously flamboyant Frank Thring. Born in Melbourne, Australia in 1926, he was an actor from practically the time he was in diapers until his death. 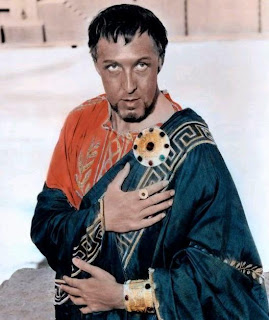 His father, F. W. Thring, was a filmmaker who is notable for having implemented the use of the clapperboard (“Scene 7, Take 23!”), an item still in use today! Though his father would be deceased by the time young Frank was ten, he had already been put to use in his father's films from the time he was a toddler. A wealth of stage work eventually followed.

After having taken over an Australian repertory theatre (where he took part in some electrifying work including plays of Oscar Wilde and William Shakespeare), he eventually relocated to England when a rival company sprang up and hampered the success of his own. More stage work in England, including playing Captain Hook against Peggy Cummins' Peter Pan and a blistering production of Titus Andronicus with the prestigious cast of Laurence Olivier, Vivien Leigh and Anthony Quayle, followed. In fact, Leigh was matron of honor when Thring (despite being a homosexual) married his wife, Joan Cunliffe. 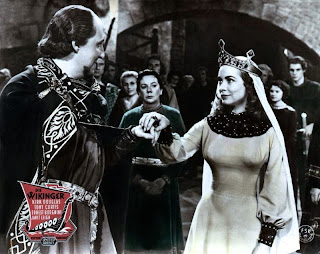 Thring made his debut in the 1958 Douglas picture The Vikings, which also starred Tony Curtis, Janet Leigh and Ernest Borgnine. As the regal, nefarious (and over-the-top!) King Aella, Thring's die was cast. Though most, if not all, of his characters were straight, he played them with an extraordinarily gay attitude and expression. This was a conceit that audiences basically had to just overlook and most of us gladly did and do! His incredibly distinctive voice, his large frame and his intimidating, sinister and unforgettable face meant that he could have had a lifelong career playing nasty villains on the big screen. 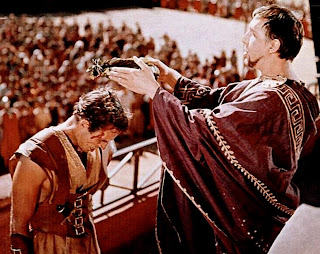 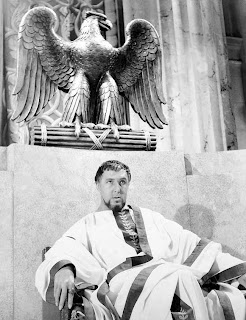 As it turned out, he did so, but really only four times to speak of. Next up was 1959's Ben-Hur, in which he played Pontius Pilate in the mammoth epic. The incredible hit won eleven Oscars, including Best Picture, and held a record in that vein which stood until 1998, four decades later. Though he was not nominated for his arresting performance amidst a crowded landscape of actors, his contributions were memorable. Decidedly unhandsome by conventional standards, he nevertheless possessed a sneering, authoritative face that was captivating to behold.

In 1961 there was the Samuel Bronston-produced epic El Cid (which, like Ben-Hur, starred Charlton Heston) where Thring played Al-Kadir, Emir of Valencia, another threatening, malicious and dangerous character.

Again, he found himself appearing in a massive hit that, like Ben-Hur, has endured today as a classic example of the historical spectacle genre. In this one, he was bedecked in turbans, golden jewelry and dark makeup with heavy eyeliner. One of his scenes has his private lair burst in upon while he is entertaining a group of people including this "lovely." As usual, his expressions throughout the film are priceless. (Also, in a surprising continuity gaffe, long shots have his headwear pushed far further back on his head than the closeups do.) 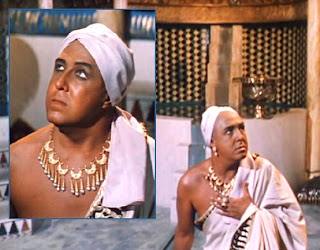 That same year, Thring had a featured role in a King of Kings, the story of Jesus Christ and really the first 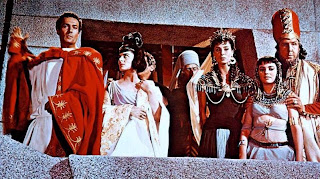 motion picture to allow his face to be completely, regularly shown. (That the role was played by the stunningly handsome Jeffrey Hunter is another story.) Thring was Herod Antipas, married to evil Rita Gam and salivating over her daughter Brigid Bazlen (as the infamous Salome.) So enraptured by Bazlen is he that he is willing to decapitate John the Baptist in order to witness her dance seductively for him. He, quite unforgettably, mugs and grimaces as she flits and gyrates around. And dig that headpiece! 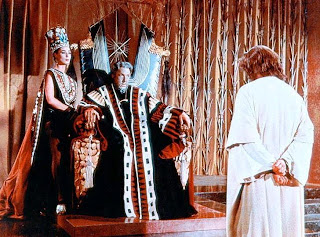 Despite this string of successes, Thring decided to depart Hollywood and go back to Australia where he continued to work in the theatre (quite a few times as Sheridan Whiteside in The Man Who Came to Dinner) and in film and television projects filmed there. 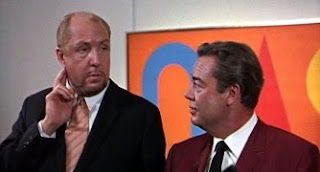 Thus, he can be seen in a small role as an art dealer in the 1969 film Age of Consent, starring James Mason and a young, nudely cavorting Helen Mirren. The year after that, he played a judge in one of Mick Jagger's few acting exercises, Ned Kelly.

The next time Thring was likely to be seen by a U.S. audience was in 1985 when Mel Gibson's Mad Max Beyond Thunderdome was released. Third in the series, Thring played The Collector, head of a slave-trading place called Bartertown. Two years after that, he had a small role in another third installment of a film series, this time Howling III. 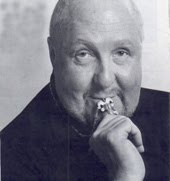 He also appeared in one episode of the 1993 Mission: Impossible TV series redux, which was filmed in Australia. Prior to his death from cancer the year after that (at age 68), Thring had become an acidic, but very popular, stage and television critic and toured in a devilish one man show about himself that kept audiences engrossed. Fittingly, the last thing he did was to provide the voice of Zeus in Hercules Returns, a spoof of sword & sandal flicks in which an actual 1963 film was redubbed with Australian voices saying all sorts of inappropriate things. 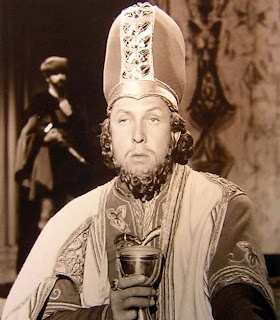 His nefarious roles during his brief stay in Hollywood are among some of the most entertaining ever put to film and he was really one of a kind. Frankly, we'd salute Thring for these performances even if he had never done another thing (which he certainly did!)

Fabulous - I always loved Frank in his hollywood outings, his Ayella in the Vikings is priceless camp.

In his El Cid turban and make-up, he looks just like Divine!