In Volume One, we covered the preponderance of bulges to be found on 70s TV. In Volume Two, we noted the open shirt syndrome. Here, we will pay heed to the once popular, now often derided, swimsuit The Speedo! 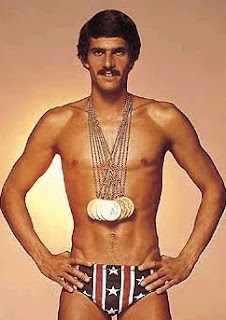 One of the likely subjects in getting the ball rolling, so to speak, was highly decorated Olympian Mark Spitz, who posed for a very popular poster in 1972 wearing nothing but a Speedo and his 7 gold medals. His American-styled swimsuit was marketed to the masses and I’m ashamed to say that I had, and wore, one of them as a youth! 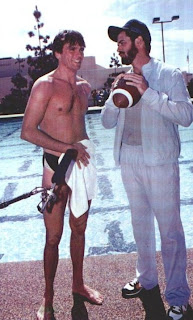 As a child of the 70s, revering the stars of my favorite TV series the way I did, there was one event above all that I enjoyed more than any other. I enjoyed it more than The Emmys, more than The Golden Globes and following it, the subsequent 364 days were spent waiting for it to return! (I exaggerate to a degree, for the special was often on more frequently than this.) I refer to The Battle of the Network Stars. 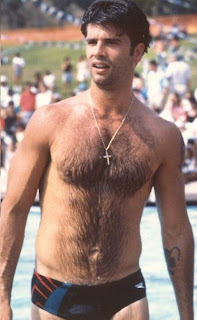 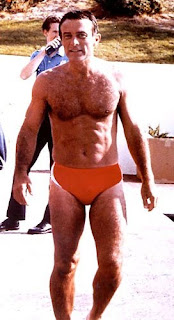 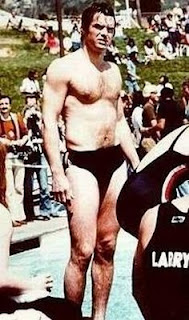 Battle began in 1976 and ran 18 times through 1985 until ending with one final stab in 1988. It was an athletic contest in which representatives from each of the big three networks (NBC, CBS and ABC) competed with each other in various events, the top two teams deciding a victor at the end in a vigorous tug of war. The program was hosted by an amusingly dramatic Howard Cosell. 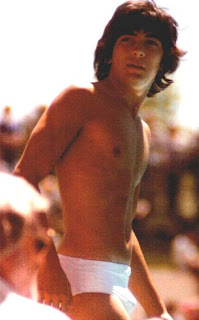 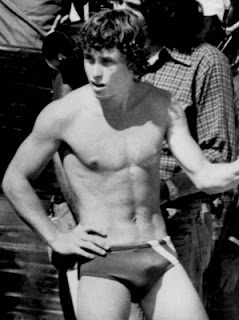 The stars were issued color-coordinated tank tops, track shorts, warm-up suits and, of course, Speedo swimsuits. Imagine the thrill of seeing 12 (4 from each team) of your favorite male TV stars being practically forced into wearing a skimpy pair of wet briefs as they swam, kayaked and partook in antics at the dunking booth. Yes, the women were there, too, and I enjoyed them as well, but that’s another story. 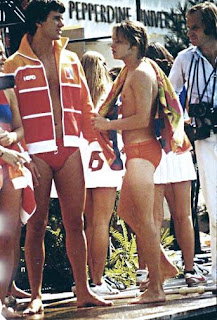 Now, yes, there would usually be a few stars who were not at the top of your list for skin-viewing, such as Tony Randall, Dick Van Patten, Ed Asner, Bill Macy, Arte Johnson, Gary Burghoff, etc… but this was more than made up for by the presence of the TV hunks of the day.

Photos from these broadcasts are remarkably hard to obtain, though some are floating around out there. Pictures selected for viewing here may not be of my own 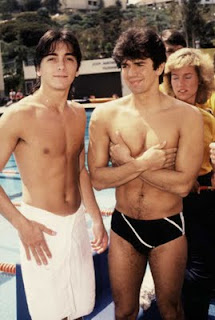 Another of my big

time favorites, on Battle, on his series Trapper John, MD, and basically anywhere was Gregory Harrison. In the opening credits of Trapper John, Harrison showed off his eye-popping physique as his character was depicted in the shower. (Season one had the frame landing perilously low on his torso. Subsequent seasons would crop the view more discreetly.) In 1982, Harrison filmed the TV movie For Ladies Only, about the travails of a male stripper whose specialty was a Zorro-themed routine. There just simply are not words to describe the effect his publicity photos for this movie, namely the on 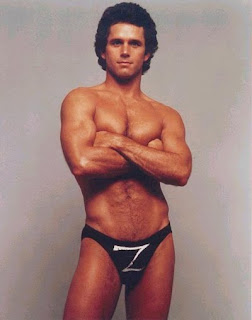 e shown here, had on my brain. Many years later, in the early 2000s, I had the pleasure of meeting Harrison in person and I can verify that his eyes were the most piercing, icy blue imaginable and his chest (which, at this point, was either clipped, shaved or waxed as is now, sadly, the rule rather than the exception) remained in incredible shape. No, there was nothing untoward in our meeting. He was simply doing a show in the theatre adjacent to mine and I shoehorned my way in to meet him on the pretext that we were playing the same venue and should greet one another(!), but I was in his dressing room as he prepared to go on. 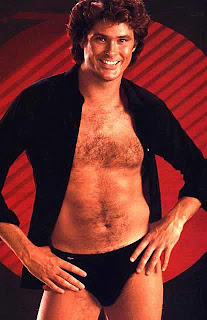 Somewhere along the line (perhaps we can thank the ever-dorky David Hasselhoff?), the Speedo became hopelessly disdained and regarded as a joke. In the wake of the AIDS epidemic and a general move towards more conservative outlooks during the Reagan and HW Bush years, a sense of modesty and body shame seemed to take over. On prime time soaps, Christopher Atkins, Michael Nader and Maxwell Caufield still sported the look, among, others, but the writing was on the wall. Now, many men wear cumbersome, often ridiculously long board shorts to swim that 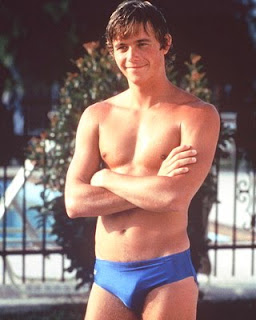 give them legs with “farmer tans” on them. Anyone not from The French Riviera who would show up to a swimming pool in a Speedo would run the risk of being giggled out of the place! That said, thanks to a variety of influences from Michael Phelps to a variety of European sports stars to a slowly burgeoning trend towards square-cut trunks or even more revealing suits (Borat anyone? LOL), there is light at the end of the tunnel, promising that we may be finally getting away from the oversized, heavy, impractical suits that have been the rage for years now.

Tellingly, when the Bravo c 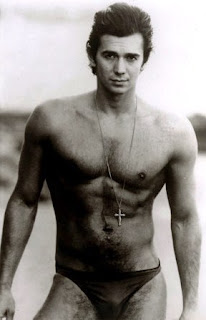 able channel made an ill-fated attempt in 2005 to revive Battle as Battle of the Network Reality Stars, only two of the contestants opted to wear the famed Speedos and they treated it as a joke. While it’s certainly true that these suits don’t look good on the average Joe (and, as a nation, we are all far fatter than we ever were!), it would be nice if those with the proper bods were able to show them off without ridicule. Those of us who enjoying ogling handsome men would be grateful for the added exposure!
Posted by Poseidon3 at 10:37 PM