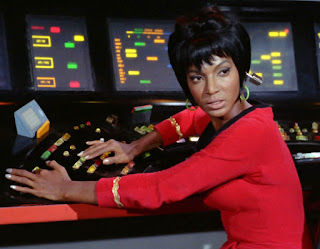 I don't go on and on and on about it, but I still love Star Trek. I never really got involved in it much beyond the initial series (now dubbed Star Trek: The Original Series or TOS, to avoid confusion with all that came afterwards. As a kid, my big fascination was with Nichelle Nichols as Lt. Uhura, who was just mind-bogglingly elegant and beautiful to me, even in her rather limited role on the show. 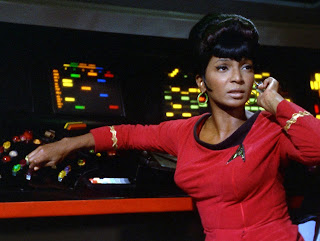 Initially, Uhura had the sort of severe hairstyle shown above, but by the second season she was sporting a more iconic 'do, stiff, but still appealingly feminine. (All of the females on the show were shown off to their best advantage with short, clingy uniforms for the crew and diaphanous, flowing gowns with strategic cut-outs on most of the guest stars, courtesy of William Ware Theiss.) To accent Uhura's connection to Mother Earth, she wore a pair of jade earrings for the first two seasons of the show, seen here and in the photo above. 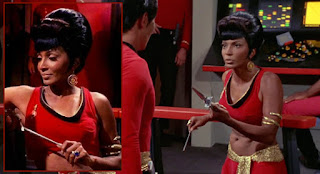 Then, of course, there was the wonderful episode "Mirror, Mirror," in which four of the Enterprise crew, including Uhura, found themselves transposed with evil counterparts in an alternate universe. Here, the designer outdid himself, putting Nichols in a sexy two-piece version of her uniform and giving her different, more attention-getting earrings. 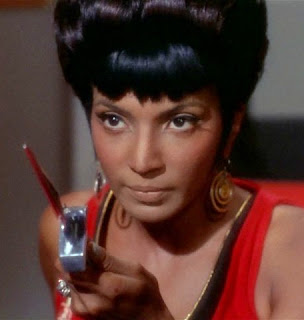 As a kid, I could not get enough of her in this guise. She was always so regal and soft-spoken on the show, but this time she got to strut her stuff and prove that when her back was against the wall, she could still cut a bitch if necessary! LOL 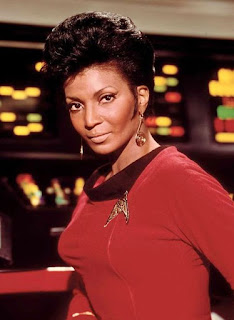 As the third and final season got underway, Uhura's jade earrings were gone for good and she was now sporting some dangling gold spiral ones as seen here. Nichols was becoming increasingly disheartened by the direction of the show and her part on it, though she still had some important moments to come (including the famously groundbreaking interracial kiss with William Shatner.) 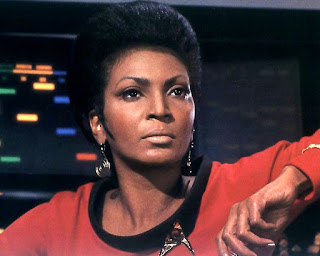 She began to change her hairstyles here and there through the season, too, but kept the gold spiral earrings as a regular costume accessory. In the wake of the assassination of Martin Luther King Jr., Nichols found it too difficult to continue working on the show and was absent for some of the last episodes. The final season of Star Trek took place in 1968-1969. 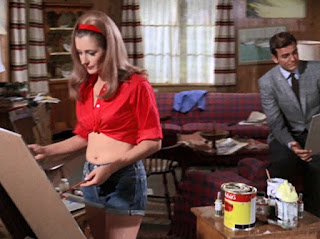 Now let's cut to another time and place. Earth, November of 1967. Mike Connors is in his first season as private investigator Mannix and in this particular installment, "Coffin for a Clown," he's interviewing an art teacher played by Diana Muldaur. 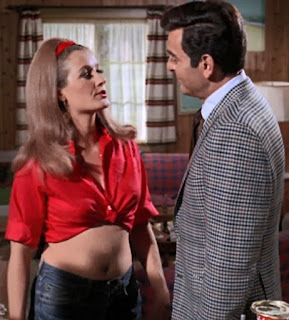 Muldaur is one of a few actresses that I used to avoid like the plague, but eventually came to adore. You can read all about that here if you wish. As Muldaur and Connors continue their interplay, it becomes clear that she is wearing a distinctive pair of earrings. 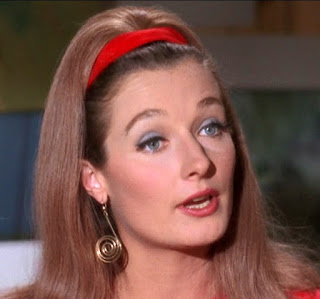 Yep! You guessed it! One season before Nichols claimed them for her character on Star Trek, Muldaur is wearing the gold spiraled earrings on Mannix! 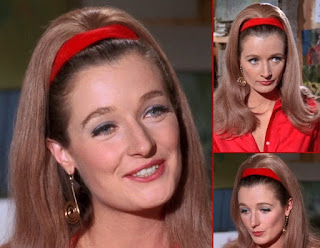 Both Mannix and Star Trek (and Mission: Impossible) were Desilu productions, so it stands to reason that there might be some cross-pollination when it came to wardrobe and accessories. (There certainly was a lot of it with casting. These series share a lot of the same guest stars.) I wonder if Desilu's president, Lucille Ball, ever hit the town in these earrings! 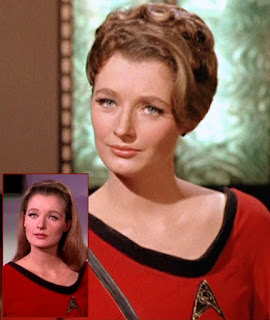 As a matter of fact, Muldaur made two appearances on Star Trek herself. The first time was in "Return to Tomorrow" - a second season episode, as a crew member who, along with Kirk (William Shatner) and Spock (Leonard Nimoy) allows her body to be temporarily used as a vessel for an alien being who doesn't have one of her own. 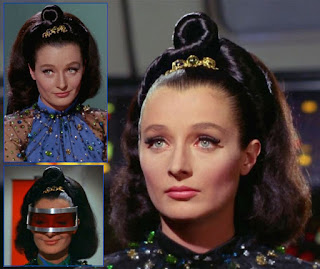 She came back with darkened hair for the third season episode "Is There No Truth in Beauty?," as the companion of an alien who cannot be directly looked at without protective eye wear, lest the viewer will go insane. 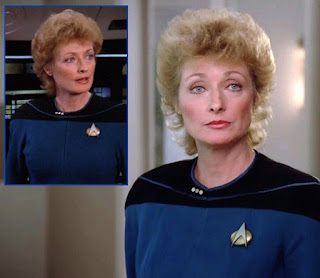 This was not to be Muldaur's final brush with the Star Trek universe, however. When the second series, Star Trek: The Next Generation, came about, the Enterprise's doctor played by Gates McFadden departed after one season and Muldaur was brought in as the rather cranky Dr. Pulaski to fill the void. Due to fan outcry and Muldaur's own lack of comfort with the show, McFadden was returned to the series for the third season, where she remained ad infinitum. 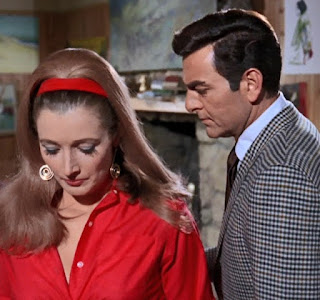 We hope you enjoyed this brief examination of yet one more example of costume pieces being used more than once in iconic television shows and/or movies.

Oh, speaking of movies, I thought you might get a little hoot out of seeing your usually glamorous and beautiful webmaster (riiigghhhtt!) done up as a sixty-something hill-jack farmer with a family full of yahoos. This is for the independent film I've been working on and will wrap today. Should this gem ever see the light of day, you my loyal readers will be the first to know!  :-) 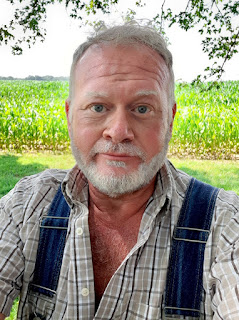 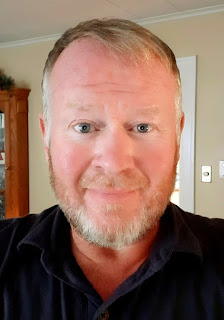 Congrats on your movie!! I don't mean to jinx it or anything--but in the event it turns out..."not as hoped-for"...will we be treated to a scene-by-scene breakdown, right here on "POSEIDON"? My friends and I have an exclusive little club we call the "Movie Debut-Slash-Swansong Club"--wherein each of us has appeared in only one film. In most cases, they are of the "not-as-hoped-for" variety! I was in a rotten movie with Woody Allen & Bette Midler in 1991 that seemingly had everything going for it. "Scenes From a Mall." Walt Disney Production, Paul Mazursky directed it. Um...NOT as-hoped-for! But I still get quarterly residual checks from SAG/Disney. A recent one was for all of 83 cents! Very dispiriting and unglamourous. I only tell you all this so that you could ostensibly look forward to joining us in this ultra-exclusive club! OVERACT! PULL-FOCUS! REFUSE TO COME OUT OF YOUR DRESSING ROOM! Do whatever you can to qualify for our club! But with that said, I have a feeling it will be marvelous and you'll be signed by MGM to an exclusive, seven-year contract, so whatever happens, it's WIN/WIN for you! <3

Poseidon, why no earrings?

We watched Star Trek a lot but I was a Lost In Space fan. I think I liked the special effects more than the stories and the people acting in Star Trek. That sure does look like Diana's same fall in both programs. Eve Arden wore the same outfit in two of her movies, Tea For two and I think The Lady Takes a Sailor. Corn yellow and black print with a pleated skirt and a shawl. Tea For Two was in Color and Lady Takes a Sailor was black & white so maybe that's why they repeated the same outfit. I wonder if was her personal outfit?

Poseidon, as someone who grew up on a dirt road farm let me say you look very convincing in your bib overalls! So convincing it's triggering a ragweed allergy as we speak!

Lucky for all of us I've never been filmed for the screen. The closest I've come was when I worked as an advertising illustrator for Nordstrom in the 80's-90's and was watching Designing Women one night. Julia was sitting on the sofa center stage and picked up the newspaper to rant about some story she had read and as she read the article out loud, staring back at the camera on the newspaper was a half page ad for a Nina Flat slip on that I drew! So weird to see something familiar in an out of context setting.

Farmer Po! You look very Cracker Barrel and kind of sexy at the same time. I hope it was a great experience and turns out swell. Were there children in all that corn?
I am always amazed at your eye for detail when it comes to spotting costumes (and now accessories!) that migrate from film to tv. Absolutely amazing. I have mentioned it before, but your detection of Neely O'Hara's costume on a Starsky and Hutch episode was mind boggling. Hilarious title for this post by the way. I am a huge Uhura fan, and worked with a waiter once who would imitate her poses from whenever the ship would experience turbulence. It always brought down the house. I only like Trek in the 60's so this was a fun post to read.

Gregory, I have no way of knowing how far this project will go, but I can guess that it's one thing to MAKE a movie and another to properly DISTRIBUTE it. If it finds its way into the world, I'll definitely announce it, but it will NOT be getting a microscopic Underworld tribute...! I will say that very much of the crew and some of the actors were here from L.A., so you never know. LOL I think it's great that you were in a major movie (and still get paid, such as it is!!) For this movie, there was a scene where I come storming out of the bathroom and one time as I was headed back there for another take, I said all dramatically and diva-like, "If anyone wants me, I'll be in my dressing room!" Ha ha! There are so many performers who warranted an "Introducing..." credit and then were never seen again!!

Shawny, I couldn't find any denim or plaid ones that suited me.

Brian, that's neat about Eve Arden. I love finding out about things like that. Also very neat about seeing your artwork pop up on TV that way!!!! BTW, I added in a photo of me OUT of makeup so that the work that the girl did on me could be a bit better appreciated. I mean, they did have to work on me some! LOL

Gingerguy, hilarious about the children of the corn. I will have you know that when I arrived on set at 7:45am and saw that corn, I immediately began singing "Oh What a Beautiful Mornin'!" The earring-ring-y ding-y is also a sort of nod to the fact that Uhura operates all the communication on the Enterprise like Lily Tomlin ran the switchboard in her Ernestine character! Ha ha ha!!!

Like the two photos at the end. Nice looking, age if in the mind.