The Best & The Worst: Treasure of Silver Lake 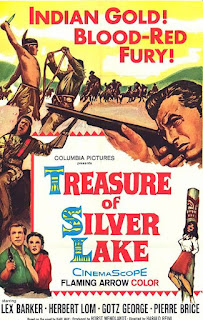 Quite a few years ago, I was watching the Encore Westerns channel and just happened upon a heretofore unknown film called Treasure of Silver Lake (1962.) I had no idea what I was in for and it was an almost surreal experience (being a German-made western set in America, but filmed in Yugoslavia and Croatia, and with dubbed voices for all.) Once I adjusted my mindset a bit, I found myself becoming highly invested in the adventurous story and loving what I was seeing. I later sought out as many of the films in this ongoing series as I could, and I enjoyed them too, but Silver Lake remains my favorite. Recently I got to see a gorgeously-restored widescreen version of it (now on Blu-Ray) and it was even better than I remembered!

* * * ALSO - If you recall the very first installment of The Best & The Worst, there was a question regarding the exposure of Jeff Bridges in the 1979 film Winter Kills. I have updated the post with some revealing information at the bottom of the page.  * * * Till next time!

Treasure indeed Poseidon. There is something to be said for stumbling across a film and having no expectations. It happens less and less as there with Netflix queues and on demand television. This does look surreal, I think I mentioned in the last gorgeous George post that "Johnny Guitar" is a European version of western themes and this looks to be in the same vein.
Dubbed horror films often have lots of cackling laughter for no apparent reason, maybe sound dubbers thought they had to fill up the silence?
That crazy wig on the scalped guy, what the heck?
I know Herbert Lom from the Pink Panther movies, the extras around him in these stills are all kind of hot.
I agree on those blue eyes, and the rest of him ain't bad either. I even like Lexs' beard. Will keep en eye out for this version of the old Croation west.

Hi Gingerguy, I did link the movie on youtube if you or anyone else wants to see it. (While it lasts, often this is taken down, but the title of the video in question may help it last longer.) It's got many things worth seeing from the great settings to the visually appealing stars. And regarding Lom, I always thought it was neat that he managed to be both hilariously amusing AND intensely scary in his career. Thanks!

Just taking a moment to comment (or rather rant) about your update regarding Jeff Bridges in Winter Kills.

I am outraged by this new trend to somewhat sanitize classic movies. Not too long ago, I watched The Last Picture Show (coincidentally another Jeff Bridges movie) and the full frontal shot of the guy walking out of the pool had been re-positioned so that male genitalia is no longer visible.

But what really ticked me off was the deletion of Barbra Streisand using the F-word in The Owl and the Pussycat (DVD and televised versions) First of all, the word is heard left and right on any cable show...so, what's the big deal? But, what upsets me to no end, is that now the scene in question no longer really makes sense to someone watching the movie for the first time, because it is her telling the guys to F-Off that provokes them to chase her and George Segal. Fortunately, I still have my old VHS copy which I had transferred onto DVD.

Knuckles, it's almost needless to say (but of course I will say it!) that I agree with you 100%, completely, totally!!! It's just disgusting. The movie is the movie is the movie. It is what it was and DON'T FUCK WITH IT! It almost seems like gaslighting viewers because you'll have something etched in your psyche, then re-watch it and begin to question your own sanity as if you dreamed it up rather than actually having witnessed it. I cite my usual example of Kathy Bates in "Misery" feeling cheated because a movie serial slightly changed the editing the next time she went to see the resolution of a cliffhanger, prompting her to scream, "He didn't get out of the cock-a-doo-dee CAR!" LOL Deleted scenes on a DVD? - yay. An extended version that puts them in? - Fine, as an extra. But the original movie should still be what it was. And to go back and snip it here or there to appeal to modern tastes or - God forbid - family values? No. NO NO NO NO NO! (BTW, I have also experienced the new "The Last Picture Show" which has less to show in its picture!! Ha ha ha!!! Ridiculous. Thank you for commenting - something you rarely do here - and getting me all fired up about it again. :-)