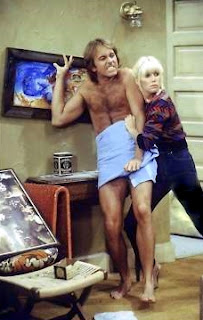 We are building a bonfire of beefcake today, all of famous gents either using or wearing a towel! Hard to believe it's been almost three years since we first settled on this topic for a photo essay and we've been gathering more kindling ever since, resulting in quite a pile of photos. Here's hoping that you find yourself wrapped up in this post and spot something to enjoy from the available selections! (If you didn't know, our cover boy today is the late John Ritter of Three's Company.) Now let's unroll the pics...

That's a whole lotta terrycloth in this here posting!!!

In some instances, I wish the towels would have been face cloths instead.

And in others, well, let's just say a bath robe might have been a better option.

Still, it was fun scrolling down...wondering who or what was going to pop up next!

I remember how sexy I thought Ken Wahl was but then he said mean things about Bette Midler after "Jinxed" and I never knew how badly I wanted to see a shirtless picture of Keenan Wynn until now. I have a thing for gruff voiced Daddy's (TMI alert) and that pic made my day. Everyone else can throw in the towel, Keenan is the man. Thanks Poseidon

Lovely collection overall though I'll never be able to unsee that Iron Maiden picture. I'll have to focus on the Adrian Pasdar and Steve Burton pictures to recover!

John Gavin is indeed rapturous. I can't say too much without things getting out of hand. So to speak.

These are great! One of my personal favorite towel moments comes from Ed Harris in the Goldie Hawn film, "Swing Shift". He sits in a easy chair and the low camera angle gives a great buffalo shot view of an actor who never took off his clothes enough in movies. I think this scene inspired Sharon Stone.

Hello all! Glad to see that you enjoyed this bit of fluff. LOL

Knuckles, I agree with you. Sometimes less is more and sometimes an Indian blanket is too small! ;-)

Armando, THANK YOU for identifying the Ian Holm shot. I appreciate it.

Gingerguy, I pretty much permanently lost my already-middling affection for Ken Wahl when he "married" the Barbi Twins.... At least he's done some admirable work for animal welfare, so there's that.

Joel, LOL about Iron Maiden... I love Adrian Pasdar, too. His brief series "Profit" was so good.

Ken, I've long heard about Ed's scene in "Swing Shift" but have only ever seen grainy caps of it. Some day I'll have to see the scene in its true glory.

Oh Poseidon I LOVED Profit!! A pity it was just too far ahead of it's time and on the wrong network, though I give Fox credit for even putting it on the air. Had it come along a few years later and been on HBO, Showtime or Cinemax where the restrictions were looser and the audience was more open to the offbeat it might have struck gold. I'm just glad I have the box set, it's something that lends itself to repeat viewings.

i thought I was the only one who had ever noticed Mickey Rooney's towel slip in Killer McCoy. It's a funny moment as he is so animated in his conversation that he doesn't notice. It's kind of sweet the way the guy on the left gently pulls the towel over the exposed area.

Missing one of the best towel scenes ever, Stanley Tucci in that 1994 cop-waitress lottery ticket movie, It Could Happen To You.

One of my favorites is in a Ken Clark eurospy flick. Unfortunately I forget which one (and they all seem to have different titles in USA release), but he has an entire fight scene with a bunch of bad guys while wrapped in a towel. Somehow it never comes undone!